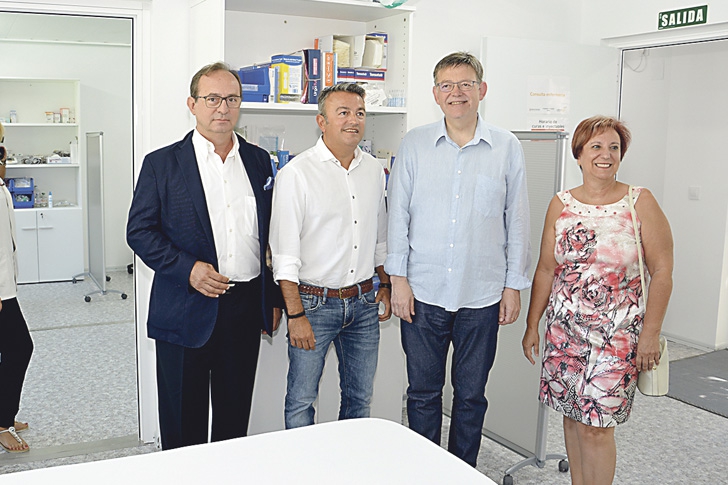 As the mayor of Javea, Jose Chulvi was congratulating his council on the building and opening of a new medical centre in Javea Park near Arenal, so the president of the Javea Park Residents Association, Maaike Onkenhout was complaining about the fact that it was built across a children’s playground.

According to the council, the population of Javea quadruples in the high season meaning that for years there were insufficient medical facilities to cope with the needs of residents and visitors, hence the need to build this centre which will be staffed by a doctor, nurse and receptionist but will only be open at the moment in high season until the end of September.

The local residents complain that the entire area had been left desolate and was nicknamed the ‘Bronx’ until women in the area banded together to try to turn a desolate former car park which became a piece of waste ground into a community area with a children’s playground.

They managed to evict the junkies and by begging and making do obtained a table tennis table, goal posts without nets and basketball hoops and regularly attracted up to 70 children a day, many of whom helped to paint the walls of the area to make it a better environment, even though there appear to be five ‘puti pubs’ close to it.

The residents say that an EU research grant of €65,700 was spent on ‘studies’ which achieved nothing and that half of the playground was taken to build the medical centre, with the loss of the football pitch and table tennis area and that the main use of the new area will be for parking cars.

Mayor Chulvi (pictured with Ximo Puig on page 1) said as the centre was opened, “It answers a demand that could be described as historic both for residents and visitors and we can now say that Javea is safe and well-protected.”

Regional president Ximo Puig, who is holidaying in Javea, attended the opening to demonstrate his support for a safe health system and said.  “This is one of the Valencian Community’s most important assets as a tourist destination compared with other competitors.”

Ms Onkenhout commented on behalf of the residents however: “Now it would seem that Javea Park has to be grateful for the establishment of the Arenal Medical centre as if it benefits them. Well NO!”

There is clearly a great gulf between the council and residents on this matter. Medical assistance is without question important to all communities but the residents feel their needs and wishes have been ignored as has the area for too long