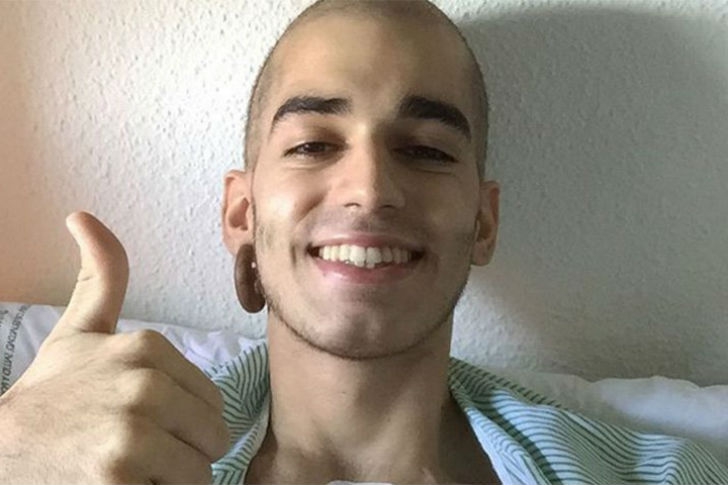 A YOUNG Marbella man who became a hero for millions as he bravely documented his fight against leukemia has died from the disease.

Thousands of people turned out to pay tribute to Pablo Raez, whose inspiring online messages helped raise bone marrow donations by over 1,000 per cent, at his funeral on Sunday February 26.

Raez, aged just 20 when he died on the Saturday afternoon, spent his last moments surrounded by close family and friends at his Ojen home. A hugely popular and inspiring presence online, he had fallen quiet since the New Year, writing 10 days ago that he was in a great deal of pain.

The athletic, aspiring bodybuilder was diagnosed with leukemia aged 18. He courageously spoke out about his struggle, attracting millions of supporters as he posted photos of himself battling the disease from his hospital bed. He became an internet phenomenon with the publication of his letter ‘Always Strong. Always.’ in mid-August.

He wrote passionately about what he was going through, signing off with inspiring messages about life, death and his refusal to give up. Raez single-handedly managed to increase the number of bone marrow donations across the Costa del Sol by some 1,400 per cent, such was the power of his message.

His body rejected a bone marrow transplant from his father last summer but hope was renewed when a young American woman, inspired by his online videos, donated her own marrow to him and proved a match.

Unfortunately at the turn of the year Pablo’s body began rejecting the second transplant.

Pablo was due to receive a Gold Medal from Marbella city on Tuesday for his incredible efforts helping to save the lives of present and future leukemia sufferers. Mayor Jose Bernal initially cancelled the event but it went ahead at the request of the family.

At the time of writing more than 50,000 people have signed a petition on Change.org requesting that Marbella name a street after Pablo. Malaga FC, whom he feverishly supported since he was a young boy, will hold a minute’s silence at their next game and play with black armbands.

Those gathered at Sunday’s memorial service included the mayors of Ojen, Marbella and Malaga. Even Mariano Rajoy, the Spanish prime minister, offered his deepest respects to the young man and his family.

Before he died Pablo Raez wrote that his dream was to inspire one million bone marrow donations. From April to June 2016, before he launched his campaign, there were 601 donors across Malaga Province, under five a day. From August to November the number surged to 9,137, or almost 75 per day.

If those numbers are anything to go by, it won’t be long before the courage displayed by this young man in never giving up, really does save a million lives.