Hospitality? This is a crazy but true tale of one hotel 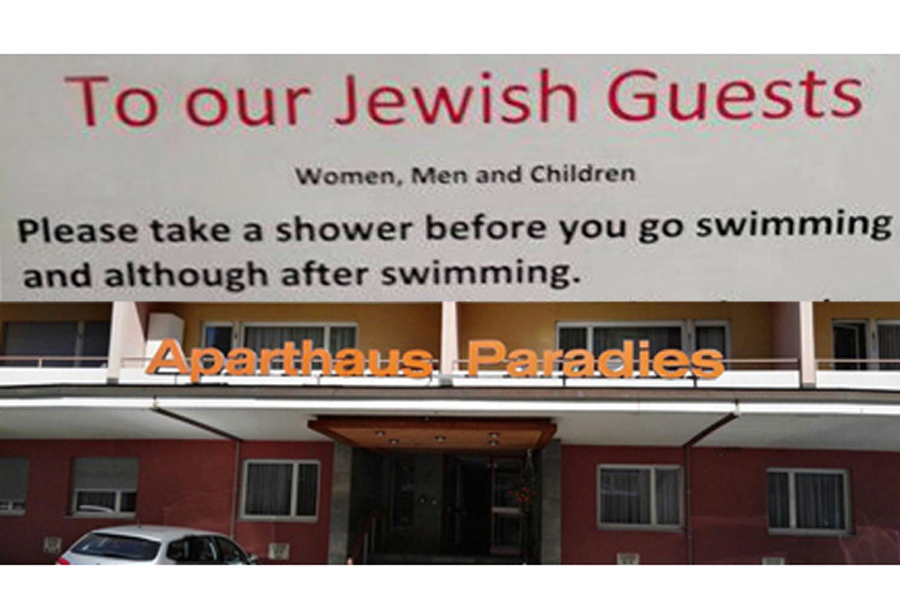 A chilling reception for some orthodox clients at the picturesque Paradies.

ISRAEL has expressed anger to the Swiss government over a hotel’s sign that told Jewish guests to shower before using the swimming pool.

The sign in English, at Apartmenthaus Paradies in the mountain resort of Arosa, triggered much criticism. Another sign told Jewish guests to use a refrigerator only at certain times.

Israel’s deputy foreign minister called it “an anti-Semitic act of the worst and ugliest kind.” Reports say the hotel has now removed the signs.

A photo of the shower sign was tweeted, after an Orthodox Jewish guest spoke about it on Israel’s Channel 2 TV. The Israeli interviewee told the TV: “The staff were really very nice to us. But one morning I came down and saw this sign. I was shocked!”

‘To our Jewish guests, women, men and children, please take a shower before you go swimming,’ it said, adding that ‘if you break the rules I’m forced to cloes [sic] the swimming pool for you.’

Israeli Deputy Foreign Minister Tzipi Hotovely said she had discussed the “anti-Semitic” case with Israel’s ambassador to Switzerland, who told her the signs had now been removed.

However, she said those responsible should be punished, as a deterrent. Correspondents say the instruction to Jewish guests to have a shower touches raw nerves about the Holocaust, because Nazi death camp guards sent Jews to ‘showers’ that were actually gas chambers.

The sign in the hotel kitchen said: ‘To our Jewish guests: You are allowed to approach the fridge between the hours: 10.00-11.00 in the morning and 16.30-17.30 in the evening. I hope you understand that our team does not like to be disturbed every time.’

Reports say the hotel often has guests from Israel, some of whom are Orthodox Jews. The hotel management was quoted as saying there was “no antiSemitic intent” and “we have no problem with Jewish guests at the hotel.”

Ruth Thomann, responsible for the shower sign, said her choice of words had been a mistake. She said some Jewish guests had gone swimming with clothes, such as t-shirts, on and had not showered first.

As for the fridge, she explained, Jewish guests – but not other guests – had been allowed to use it to store kosher food. Someone’s in for a dressing down.

Not good PR me thinks!