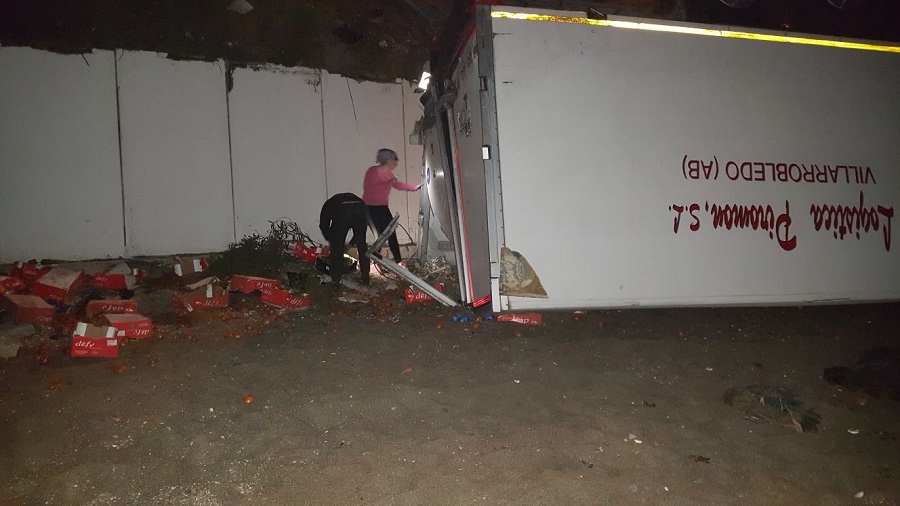 THIS is the shocking moment that looters ransacked the scene of a deadly lorry crash on the Costa del Sol.

At least seven people ran off with their arms full of tomatoes, which the wrecked vehicle was carrying in its trailer, while others arrived to pay their respects to the driver, who died in the accident.

Among them was British expatriate Andrea Brown, 54, who captured the images after heading down to the site with her husband.

“We went down with a candle and a white rose to show solidarity,” she told the Euro Weekly News. “At first I thought they were doing the same, but then we realised they were brazenly walking off with crates of tomatoes!

“We were very shocked and upset to think that the poor man had only been gone a couple of hours and these people just didn’t seem to care.

“That man could have been a husband and father.

“The scene was taped off but we didn’t see a single policeman on the beach, they were all up on the road attending to the broken barrier.”

The raid – which took place after the driver’s body had been removed by medics – has not been reported by local Spanish media.

It comes after the articulated lorry careered off the A-7 dual carriageway on a notoriously dangerous bend in La Cala de Mijas, smashing through the crash barrier and plummeting several metres onto the beach.

The driver was reportedly killed instantly, and the tractor unit was so badly damaged that his body remained trapped inside while fire fighters worked to cut it free.

Police are probing the cause of the incident, which sparked fresh calls for the regional authorities to improve safety on the hazardous stretch, since it continues to be an accident black spot despite installation of average speed cameras and prominent signage.

Francisco Sepulveda, president of La Cala de Mijas resident’s association, said: “The radar has reduced the number of accidents, but it is still rare that a month goes by without one…they need to change the layout.”