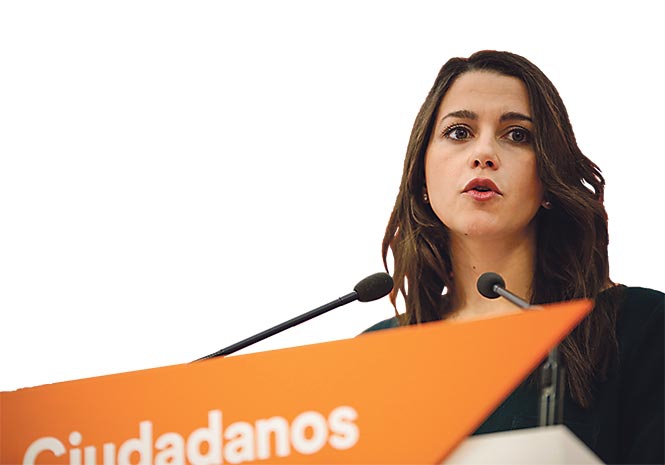 THE Partido Popular has a problem on two fronts.

One, as the governing party in Spain it has lost credibility in Cataluña where it nominally governs after suspending the region’s autonomous status.

The second problem that the PP must contend with is the Ciudadanos party, the most-voted in the Catalan elections. Ines Arrimadas, Cs leader in Cataluña, didn’t put a foot wrong there, compared with the clumsy footwork executed by the PP’s Xavier Garcia Albiol.

But the problem posed by Cs is not confined to Cataluña. Rajoy and his closest advisers see the party snapping at the party’s vulnerable flanks nationwide and stealing votes in the same way that Podemos has poached PSOE supporters.

And unfortunately for Rajoy, there is not even a whiff of corruption attached to Cs, unlike the PP which despite all its efforts cannot exorcise the spectre of corruption that still haunts the party.

WHEN Francisco Franco died in 1975, wounds from the Civil War still afflicted and influenced Spaniards who had fought or lived through the 1936-1939 conflict, regardless of which side they or their families fought on.

Lingering or inherited rancour did not prevent the apparently impossible from happening and despite hiccups – the Atocha massacre of left-wing lawyers, the attempted military coup of February 1981 – the Spanish took the road to democracy.

They reached their destination because Adolfo Suarez’s government obtained consensus from communists and the right wing alike. It was feasible because everyone at the time wanted consensus without believing this demonstrated weakness.

The pro-independence parties and the national government headed by Mariano Rajoy hope for consensus in Cataluña, but neither will cede a centimetre for fear of appearing to waver.

And unfortunately for Spain and Cataluña they are the weaker for it.

MADRID mayor Manuela Carmena had already earned the enmity of thousands of citizens with driving restrictions in the centre of the city.

As Christmas approached, the former Supreme Court judge and a lawyer who by chance escaped the Atocha massacre in 1977, went one step too far.

Calle Preciados and Calle Carmen were made one-way for pedestrians with others due to follow.

Anyone who has ever tried to shop in Madrid over the holiday season would agree with the wisdom of this move. Apart from anything else it has prevented head-on collisions between people absorbed in their mobiles.

FIFA recently warned the government not to meddle in the election process of a new president for Spain’s Football Federation (RFEF).

This is temporarily headed by Juan Luis Larrea after former president Angel Maria Villar, now bailed, had to step down following corruption charges.

Failure to comply could bar Spain’s national side from all international competitions including the next World Cup in Russia FIFA warned.

As though Spain didn’t have enough to cope with over Cataluña, it’s facing a crisis with far-reaching effects on the nation’s happiness and well-being.

Tinker with laws if you have to Sr Rajoy. But leave the footie alone.

TO put the lid on it, Barça beat Real Madrid on their home ground in the Bernabeu stadium 0-3 two days after the elections.  And Rajoy a Madrid fan, too.