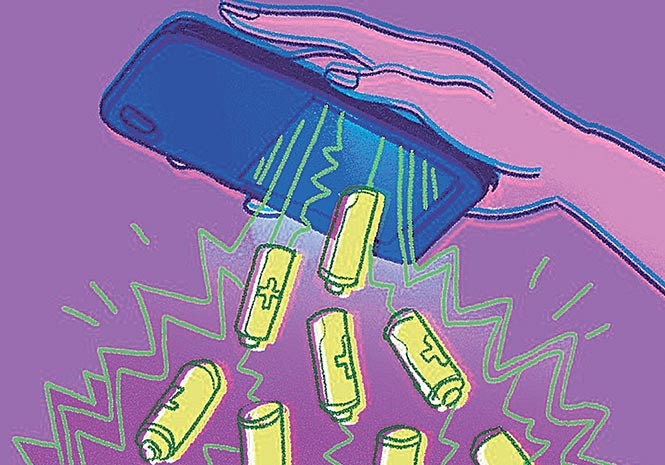 CELL-BY DATE: The end of the removable battery?

AM I the only one to get a charge from juggling and relocating batteries religiously between devices until they really are very, very, very empty?

By the time my throwaway AA battery has sparked its last after an action-packed journey from electric razor to torch to electric spaghetti fork (yes, mea culpa…) to doorbell to kitchen clock, I realise that yes, I do indeed need to get out more, but at least my humble battery has had almost as many lives as our cat.

The irony is that we’re a dying breed in an increasingly battery-powered world, and it doesn’t take a conspiracy theorist to unearth the truth: manufacturers increasingly want us to change our devices rather than their batteries. Removable batteries are (becoming) history.

The underlying wastage is staggering, as many of us can see by simply pulling out a desk drawer to reveal a graveyard of phones finished when their batteries were.

Removable batteries peaked in the 90’s and have been losing ground ever since. The recent debacle where Apple finally fessed-up to slowing down older iPhones as their batteries weakened, nudged the issue back to centre-stage.

At least iPhones can take a replacement battery, even if it’s an expensive surgical intervention which only Apple will perform. Not a single flagship Android phone is now open to the public.

For fancy phones, metal and glass bodies simply don’t mix well with removable batteries, playing havoc with waterproofing and sealing. Removable batteries are bulkier, in a world which prizes slimness over sense.

I have an early Nexus tablet still ticking along on its original battery after five years and some 400 charges. As a DIY geek I could indeed swap its battery with the aid of a specialist kit – but it costs almost the same as an enticing new tablet so why would I?

A friend recently scrapped his entire laptop because it started showing a ‘BIOS’ error when booting. Had he asked, all it really needed was a new button battery worth a euro.

But today the only phones with removable batteries are budget ones, and who’s to say you will still find niche batteries for a GreatLeapForwardfone three, four or five years down the line so why bother?

Manufacturers generally are increasingly replacing the ubiquitous removable cells with their own proprietary sealed units – while persuading us to buy today’s new kid on the must-have gadget block, the portable powerbank.

As a David Attenborough aside to it all: could we thus also be facing the extinction of one increasingly endangered animal: the Duracell Bunny?