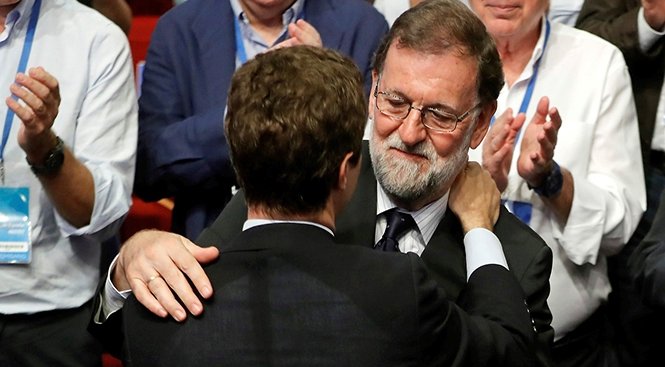 IT was a good-looking low-key, high-impact gesture when the former president of the Spanish government, Mariano Rajoy, packed his bags after the Vote of No Confidence.

As a high-ranking civil servant, the post of Property Registrar in Santa Pola (Alicante) had been kept open for him for 28 years and was his to return to whenever he wished.

“I’ve come to Santa Pola to stay,” he said in June but less than two months later, he announced a transfer to the Property Register in Madrid’s Paseo de la Castellana, a stone’s throw from the Partido Popular’s party headquarters in Calle Genova.

Earlier the PP’s new leader Pablo Casado drew attention to Rajoy’s Santa Pola connection and commented that his wife’s family always spent the summer there.  And no doubt he would prefer his former boss to spend the entire year there, reassuringly distant from Calle Genova.  After all, Casado is an Aznar man.

Mr Bumble gets it right

THE Manada – the five men convicted of gang-raping an 18-year-old girl – are still free while appealing their sentences for what a Pamplona classed as “sexual abuse.”

Meanwhile Juana Rivas risks five years in jail and loss of custody rights over her children for six years because she tried to snatch her children from her abusive Italian husband and return to Spain.

The law is the law, the judges say, and must be obeyed to the letter regardless of sentiments.  All of which brings to mind – to an English-speaker at least – Mr Bumble.

Remember what he said in Oliver Twist?  “If the law supposes that, the law is an ass – a idiot.”

And before I get done for contempt of court, it was Dickens wot said it, not me, m’lud.

She lost the Partido Popular primaries to Pablo Casado and now has the indignity of seeing her eternal rival, Dolores de Cospedal, who was knocked out in the first round, in a more promising position than her own.

But although she has never before been so publicly tested or rejected, Saenz de Santamaria is tough enough to survive and revive, not least because Casado still has the little matter of his curiously-acquired Master’s Degree in Autonomic Law to explain away.

In the meantime, the ex-vice president has declared, “I shall, as always, be loyal,” which is never a good sign.

Loyalty should be a given, not a promise.

CARMEN CALVO, vice-president and also Minister for Equality, would like to see the Spanish Constitution written so that it is “bi-gender.”

This has nothing to do with sexual orientation but is a newspeak way of banishing the old grammatical preference for masculine plurals.  So niños can include a niña or two and likewise female ministers can be lurking amongst the males referred to in ministros.

It’s been pointed out that this might be unfair and belittling but doctoring the Constitution as Calvo wants – niñas y niños and ministras y ministros each time will make for grim and clumsy reading while depriving the 1978 document of most of its literary punch.

The formula is already peppering politicians’ speeches and is noticeable in the written media, but possibly this is one instance where it’s welcome.  Not by the readers, naturally, but by the hacks who get paid by the word and see this as a nice little earner.