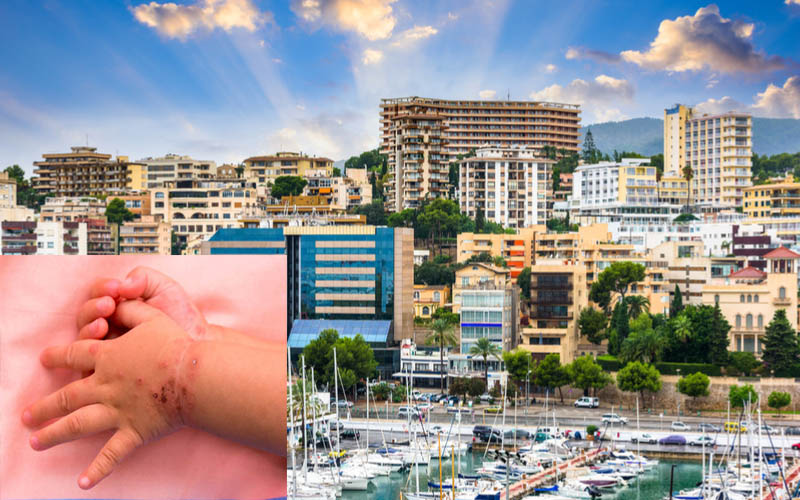 THE MOTHER of nine-month-old twins on holiday with their family in Spain claimed they contracted hand-foot-and-mouth disease (HFMD) in a case her doctor said was the worst ever they had ever witnessed.
The McCabe family flew to Mallorca on September 19 and three days later, mum Kimberly noticed the symptoms of HFMD appear in her twins.
The family were staying in a hotel on a holiday package.
Mrs McCabe, 28, alleges that the holiday operator made no attempt to warn her of the HFMD outbreak in the resort.
Kimberly also claims the hotel ‘did their utmost’ to hide the fact that numerous outbreaks of the contagious disease had been reported at the premises.
The 28-year-old mother has told the press that the HFMD outbreak her twins contracted ‘ruined’ the family’s holiday and recalls her babies were covered in red blisters which aggressively spread over much of their skin.
What’s more, Mrs McCabe claims she was told by a holiday rep after complaining: ‘We don’t want to scare our guests, that’s why we’re not telling them’.
The family were permitted to fly home where Mrs McCabe took her children to her GP.
She claims her doctor branded the case as the ‘worst ever’ outbreak of the disease they had seen.
Kimberly says she has received ‘hundreds’ of responses to her original Facebook post from parents sharing their HFMD ordeals from the same hotel in Alcudia, Mallorca.
She has blasted the hotel for failing to notify parents with young children and for neglecting their ‘duty of care’ for their guests.
A hotel spokesperson said: “We are aware of a small number of cases of hand-foot-and-mouth”.
“Forty-eight people have been confirmed with the infection since September 11”
“In September we have had over 12,000 guests.”
“There are a number of actions that we as a resort are taking to help prevent the spread of the disease and that our customers can do as well.”
Last month, a British family were confined to their hotel apartment when their children contracted HFMD on a holiday trip to Spain.