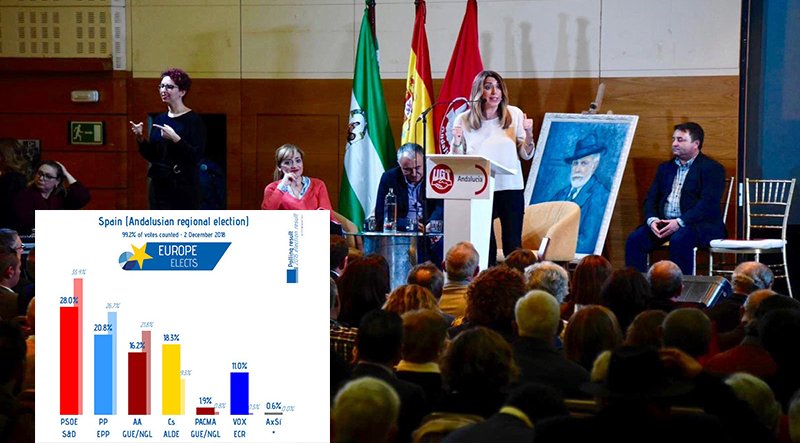 Diaz’s PSOE was left with 14 seats less than before the vote CREDIT: @Hildevautmans and Susana Diaz, via Twitter

THE left-leaning Partido Socialista (PSOE) has lost seats but remains the largest party in the Andalucian regional assembly following elections yesterday (Sunday), with a far–right party having made gains.
Junta de Andalucia President Susana Diaz’s PSOE now has 33 seats in the assembly, down from 47 before the vote. The party received more than 1,009,243 votes, a share of 27.95 per cent according to polling data.
Vox, a far-right party, which was tipped to win its first seats in the assembly after the ballot, now has 12 seats.
The conservative Partido Popular (PP) was left with 26 seats, down from 33, while the centrist Ciudadanos gained 12 seats, up from nine to 21 after yesterday’s vote.
The leftist Adelante Andalucia, a coalition of Podemos, Izquierda Unida (IU) and other left-wing parties, won 17 seats.
Juan Cornejo, of the PSOE in Andalucia, told Spanish media the results were not as bad the party had expected but added the gains made by Vox were “dangerous”.
“We will open dialogue with everyone to build a Andalucia that is positive for everyone, except with the extreme right,” Cornejo said.
Santiago Abascal, the leader of Vox, said the party had shaken the PSOE in Andalucia who have held sway in the region politically for decades.
“The Reconquista begins in Andalucia and will be extended to the rest of Spain,” the party tweeted yesterday.
The results mean that Diaz will now have to form a coalition with another of the assembly’s parties in order for PSOE to remain in power. It will most likely join with either Ciudadanos or the Adelante Andalucia grouping.
Politicians and pundits across Spain will also be looking at the results as a possible indication as to what could play out in other regions or in a future national election.

Liberalism on the rise in #Andalucia! Congratulations to @CiudadanosCs with their big win in #AndaluciaElecciones. Together we can respond to the rise of populism and far-right parties in Europa in wake of #EUelections2019! @ALDEgroup pic.twitter.com/GiewxL4H58