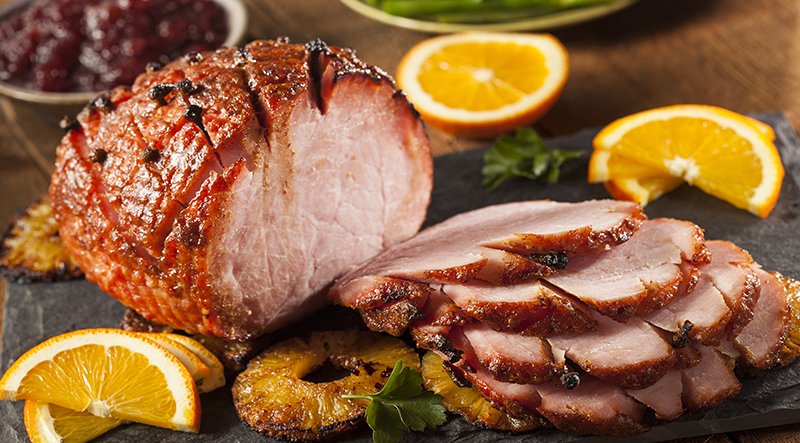 MUST HAVE: Don’t forget the ham! Photo: Shutterstock

This week Celebrity Chef from Ready Steady Cook &Fellow Master Chef Steven Saunders, proprietor of The Little Geranium in La Cala shares a special Christmas baked ham recipe
BEFORE we moved to Spain we lived in Hertfordshire in a modern barn conversion on a farm.  At Christmas time I put lights on the many trees we had at the front of the house and I always put up a huge Christmas tree by the front door.
Inside I had a long banquet style dining table that seated about 20 people, so as you can imagine this was the Christmas house!  All my family from Suffolk, London and New York would be there on Boxing day to celebrate Christmas, it was the tradition.
One Christmas I had forgotten the ham on boxing day and my niece Scarlet Saunders (who is now an actress in the TV series Casualty) told me off, although I had a whole sirloin of beef, the turkey, venison, shellfish etc but no ham!  But she had a point. Christmas is about family and friends and all getting together but its also about the food and of course the traditional turkey, but on Boxing day we want to see a baked ham, some pickles and condiments, maybe some bubble and squeak using up the Christmas day veggies and its nice to see a Christmas cake and loads of cheeses.
The extravagant person that I am, I always went to the extreme and we had a BBQ with sausages and venison on the bone cooking outside as well as lobsters, crabs, smoked salmon, usually a goose as well as the turkey and a sirloin of beef and of course the centre piece…the baked ham!
The Boxing day table was always set up in the kitchen taking over the whole space and family and friends went into the kitchen piled their plates high and then returned for more. One year I had been so busy at the restaurant that I asked one of my junior chefs to cook the lobsters, the crab, the ham and other things for me. He delivered it all into my home and on Boxing day morning I put it all out on the table as normal.
One of our friends, Jill, went up to the table and within minutes screamed out so loud that we all came running in. The chef in charge of preparing the food for me had assumed that the whole crab had been cooked as it didn’t move and to his defence an alive and a cooked crab look pretty similar, unlike lobsters. Jill had turned the crab over to attempt to pull off some meat and the crab struck back at her with its giant claws!  It was so funny at the time but we all felt sorry for the crab so we removed it from the table and kept it alive in salt water for days after.
Ill never forget Jill saying, I’m off shellfish, I’ll just have some ham!
Honey Baked Ham
INGREDIENTS
Serves 8–10

For the honey glaze:

Method
Note: Always cook the gammon in advance as you don’t want to be doing this on Christmas day or boxing day!
Put the gammon into a large saucepan and pour on enough cold water to cover.
Allow the gammon to soak for about 5-10 minutes then drain the water off and wash again. Apart from cleaning it this helps remove some of the salt which was used to cure the ham.
Now cover again with cold water and add the carrots, leek, onion, peppercorns, coriander seeds, cinnamon stick and bay leaves. Bring to the boil, turn down to a simmer and cook for about 3 hours to 3.5 hours on a low heat, topping up with more water if necessary. Skim off any impurities that rise to the surface. Allow to rest in its own cooking liquor until cool. Remove from the cooking liquor and refrigerate the ham until you require it. Save the cooking liquor for stock or soup.
Now on Boxing day make the glaze. Put the sugar, sherry, vinegar and honey into a pan and stir over a low heat, simmer for 3–4 minutes, until you have a shiny syrup.
Preheat the oven to 190°C/Gas 5. Lift the ham onto a board. Remove any string and then cut away the thick skin from the ham, leaving behind an even layer of white fat. Lightly score this fat all over in a criss-cross, diamond pattern, taking care not to cut into the meat. Spread over the English mustard and stud the centre of each diamond with a clove.
Put the ham into a roasting tin and pour half of the glaze over the surface. Roast in a pre heated oven 180c for about 15 minutes.
Now pour on the rest of the glaze and return to the oven for another 30 minutes until the ham is golden brown, basting with the pan juices frequently to get an even colour.
Remove from the oven and leave to rest for 15 minutes before carving. Serve with Cumberland sauce see below.
Cumberland Sauce
INGREDIENTS
1 lemon
1 orange
4 tablespoons port
4 heaped tablespoons of redcurrant jelly
1 teaspoon of mustard powder
METHOD
Zest both the lemon and the orange, using a potato peeler or zester then cut them into small strips approx. 2 cm long and as thin as possible (julienne)
Boil them in water for 5 minutes to extract any bitterness, then drain well. Now put the redcurrant jelly in a saucepan with the port and melt, whisking together over a low heat for about 5 minutes.
Mix the mustard with the juice of the lemon and orange until smooth, then add this to the redcurrant jelly sauce above boil and stir well and finally the strips of lemon and orange zest, heat through until thickish.
You can email Steven any queries or questions on [email protected]
Steven Saunders FMCGB
The Little Geranium
La Cala De Mijas
Behind the Town Hall in central La Cala
www.thelittlegeranium.com