A glimpse of McLaren’s new car 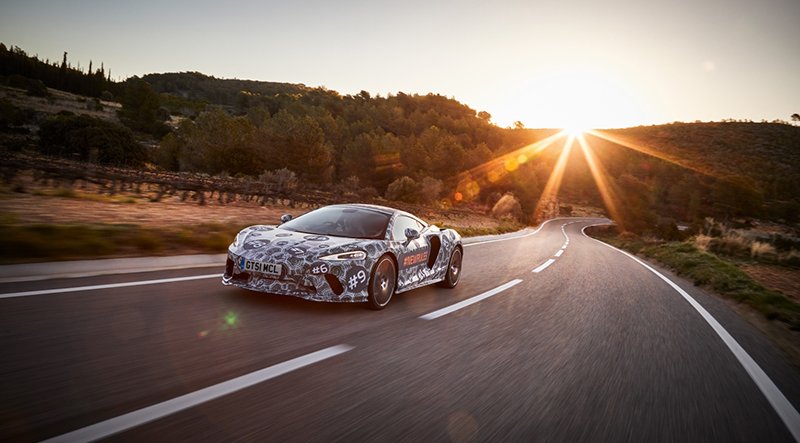 UNDER WRAPS: Grand Tourer’s outline can be seen, but details are still hidden.

MCLAREN has unveiled a bit more of its much-anticipated grand tourer – but it is teasingly keeping it in camouflage wrap to hide its full glory.

Up until now the only pictures of the car have seen it clad in shape-changing, additional body panels used to hide its true form.

But now the car’s “sleek and boldly elegant design” (according to McLaren) can now be discerned although the lightweight body remains covered by a shrink-wrapped ‘ livery. If you want to see more you will just have to be patient – the company is promising it will begin to peel off this disguise this May.

The application of the shrink-wrap will also enable the Development Team to enter the closing stages of the car’s extensive evaluation programme, which has already encompassed thousands of miles in hot and cold climates across the globe.

The team says that the ‘Grand Tourer’ has already proven its ability to cover long distances in supreme comfort, but it has so far done so with extra shape-changing and noise-inducing panels applied.

Now that these have been removed, the Development Team will run further validation tests, including a 1,000 mile (1,600km) drive from McLaren’s development base near Barcelona, Spain, back to the McLaren Technology Centre in Woking, England.

To be completed in one stint with two occupants and a full complement of luggage, this is one of many long-distance drives that will help the team to confirm the new model is both comfortable and refined over the long distances a grand tourer is expected to cover.

He promised that the fourth car to be launched under the company’s Track25 Business Plan will combine competition levels of performance from a twin-turbo V8 engine with continent-crossing capability and a level of agility never experienced before in the luxury Grand Tourer segment. He stated that the McLaren of Grand Tourers will be the most usable mid-engined car yet. The McLaren of Grand Tourers will also be the only one to share its DNA with a Hyper-GT: McLaren’s Speedtail. Mike went on to say that the car – a name is yet to be announced – won’t be part of any of the company’s existing model Series and will be a unique, tailored model. Its interior will feel spacious, uncluttered and modern with only authentic, high quality materials employed.