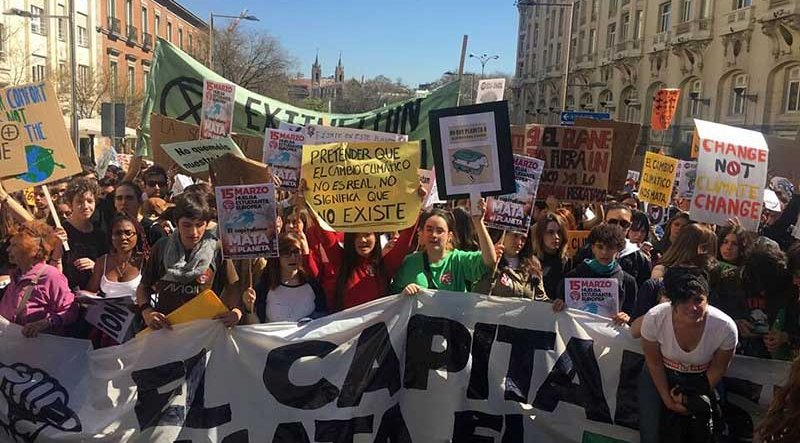 IF you are heading into big cities today, watch out for traffic disruption as activists against climate change have called for 30 demonstrations across Spain.

Called Fridays for Future, it is part of the Extinction Rebellion protest movement that has recently caused disruption in parts of the UK by blocking roads with marches.

In Spain activists plan to block access to Repsol’s headquarters in Madrid as well as to demand action against climate change from politicians ahead of Sunday’s general election.

“The date chosen, three days before the general elections, is not coincidental”, admits Juventud por el Clima, the network that promotes Fridays For Future in Spain, since its objective is “to place the fight against climate change at the top of the political agenda”.

“Whatever the outcome of the next elections, it is essential that the new government addresses with effective measures the climate emergency in which we find ourselves,” the students said in a statement.

The student movement has been calling for weekly rallies in dozens of Spanish cities every week since last February, and brought thousands of people out onto the streets on March 15, when an international climate strike was called in countries on all continents.

In Madrid, it is usual that on Fridays rallies are called in front of the Congress of Deputies. On this occasion, the protest has been brought forward to today.

Protestors will gather in the Cuesta de Moyano, at 6.30pm and will then march along the Paseo del Prado and finish in front of Congress.

Barcelona and Valencia have already seen today’s protests, while in Sevilla there will be a demonstration from Las Setas at 6pm which will finish at the Junta de Andalucia’s headquarters.

In Bilbao, the rally will be held at 6pm in Plaza Moyúa, with further protests planned for the same time in A Coruña, Santiago, Donosti, Pamplona, Zaragoza, Tarragona, Ibiza, Alicante, Malaga, Huelva and Santa Cruz de Tenerife.