TECH FOR THE TIMID: Dashed on the rocks 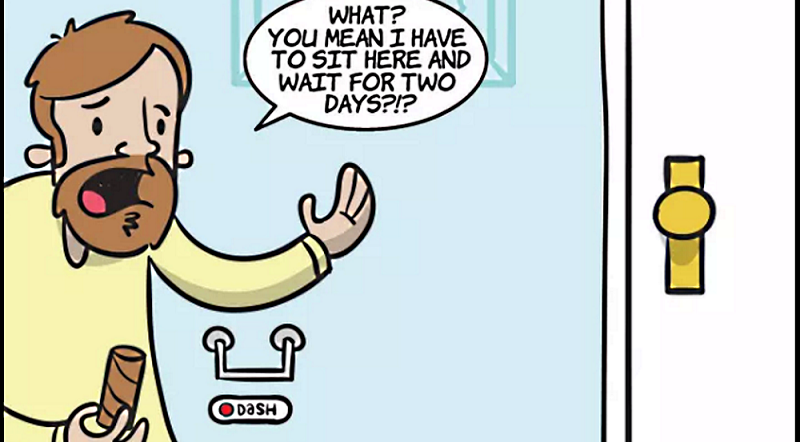 Terence Kennedy salutes a pain in the button
FAREWELL little white Dash button, we hardly knew you.
Well, barely, in its brief five years of life (though only two in late-adopter Spain). Certainly not at all in Germany where the courts ruled this January that it was a nein-nein.
Killed off worldwide by Amazon recently, at its peak the retailer’s €5 Dash button came in several hundred ‘flavours’.
Initially thought to be an April Fool’s joke, the tiny electronic gadgets could be stuck on the wall, the fridge, the cupboard, and indeed in the toilet – a one-button method of re-ordering common household products.
Just jab the Dash button dedicated to Tide washing powder, say, and its embedded wireless circuit would instantly send out your replenishment order to the Amazon warehouse. Hey presto, a day or two later and you could be knee-deep in detergent – as indeed one hapless family was when their toddler discovered the button.
But over in Germany a court ruled that the buttons didn’t provide sufficient information about the product being ordered or its price. Shoppers have to know what they’re paying.
Given technology’s inevitable Law of Unintended Consequences, hackers naturally descended on the little devices to make them seriously unfit for their original purpose.
Hacked Dash buttons cropped up to summon an Uber taxi, to order pizzas or beer, to track baby habits or working hours, to control home lighting, to fire up Netflix, to brew coffee or open the garage door, even to send a pre-worded text or most scarily of all, to transfer money from your checking to your savings account. All with a €5 gadget and a twitch of reprogramming.
But now, says Amazon, we have moved on. Worryingly for some of us, it says hundreds of ‘Internet of Things’ devices are now actually capable of ordering stuff themselves.
Oh great: soon our gadgets can just rack up our grocery bills all by themselves while we get on with the important business of consuming all the stuff they’re ordering. It’s the ultimate capitalist wet dream: consumption that entirely removes the consumer’s decision-making process from the transactional loop.
And the company certainly isn’t giving up on ideas for parting us from our cash. Alongside their hope that you will use an Alexa assistant to voice-order stuff, Amazon’s ‘Subscribe & Save’ program lets you ‘automatically receive your favourite items every month’. Goodbye regular shopping lists.
Should we weep over the demise of the Dash? Not at all; offer it a brief word of thanks for creating more smart-home gear, come the day you reorder bread through your toaster.
‘Alexa don’t buy…’
Suprise surprise: despite 70 million Alexa-powered digital assistants sold so far, almost no-one uses them to actually order stuff.
That’s not what Amazon hoped. Barely 2 per cent of ‘Echo’ owners use them for buying things. Of those who do, 90 per cent don’t repeat the experience. Ouch.
That sheds doubt on predictions that the smart speaker shopping market will soon be worth far more than today.
One problem is how to stop your kids, or indeed even an attentive parrot, from ordering stuff simply by saying ‘Alexa, buy some ……’.
I should know. Teaching a nervous friend how to use his new assistant, I talked him repeatedly through the steps of ordering toilet paper. Alexa overheard – and he now has a year’s supply.