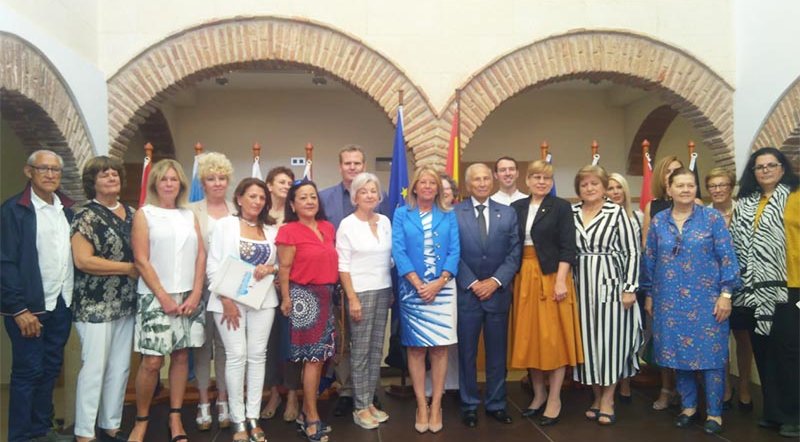 An extensive and varied list of organisations, associations, businesses and individuals were invited to attend the official event which celebrates long standing business links between European.

Angeles Muñoz Uriol told Euro Weekly News: “We want to show that Marbella is a very cosmopolitan city with more than 140 nationalities from all over the world. This creates a very international atmosphere of which we are very proud.

“People decide to move here, the best place in the world we believe, for the quality of life and business opportunities. Marbella is well connected for the airport, it’s a wonderful and easy place to live, work and enjoy life.

Tobias Heyden is the First Vice Governor of Lions Club Marbella. He told EWN: “I’m a member of the German speaking Lions Club Marbella. We have five clubs in Marbella including a global Lions club. Each club has its own dynamic philosophy, their own autonomy, but we all serve the community of Marbella.

“We organise activities and fund raising events and give the money to people who need it.”

He added: “This day is very important for us we are all part of the Marbella community, there are also French, Swiss, residents from Luxembourg and more. Since the European Union was formed we have all been living together in peace and to have a reception like this organised by the Mayor is very special.

President of the German Lion’s Club, Anya Straub, added: “It includes us in Marbella life and we are grateful for that we feel very welcome and at home here, it’s the best.”

“For us it is important that the Mayor and the city make us so welcome,” she said, adding:  They ask us to be involved and ask us what our expectations are, and what we as people and businesses can bring to Marbella. It’s not just about enjoying and simply taking from the city but also about giving something too.

Vanessa, who has lived in Spain for 33 years, went on to say: “Lots of nationalities feel at home here. We are cared for and looked after here, but we must be there for others too, and contribute and have a commitment to Marbella.”

Europe Day is observed on May 9 each year and celebrates the presentation of the Schuman Declaration in 1950, which proposed the creation of a European Coal and Steel Community, the forerunner to the European Union.

The idea of the community was that its founding members – France, Germany, Italy, the Netherlands, Belgium and Luxembourg – would pool their resources and form a common market for them by getting rid import and export duties.