I wish we had one of him 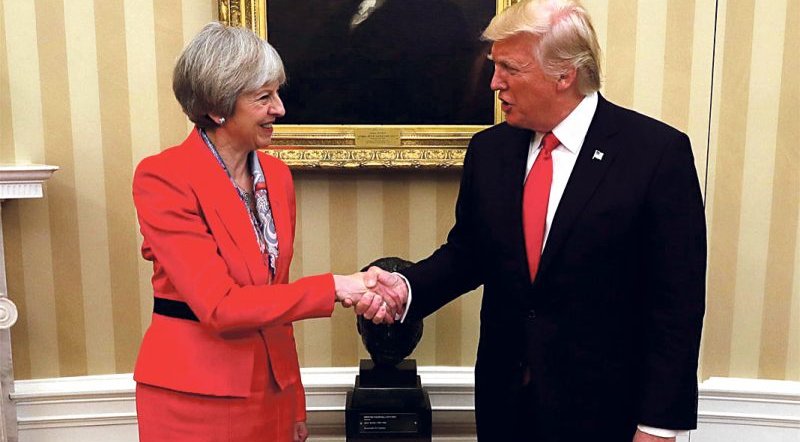 PRESIDENT TRUMP: Made a very favourable impression on his visit Credit: Shutterstock

LOVE him or hate him. Laugh or lampoon him. I wish we had one of him. It’s Donald Trump I’m referring to.

Personally I think his recent State visit was pretty successful. At least it managed to show up a few of our own so-called statesmen in their true colours. Not the least Jeremy Corbyn. This man is supposed to be a potential leader of the country – Ha! I wouldn’t trust him to run a London bus.

We have the President of our greatest and strongest ally visiting, on what I considered a brilliantly selected occasion for our two countries, and this so-called contender for number 10, the leader of the opposition, who has condoned terrorist organisations and supports Communist regimes, refuses to break bread with the Queen of the realm and the leader of the free world – basically because he doesn’t like some of his policies! I mean how juvenile and utterly ridiculous can you get?

Not only that, he chooses instead, to address a (much smaller than anticipated or reported) rabble of lefties, at a rally comprising mainly of followers epitomised by an overweight (ex) NHS worker, with a ring through her nose and purple hair, screaming ‘Nazi Scum’ into the face of an OAP who dares to display ‘Welcome Trump’ on his hat. Corbyn’s speech to these people (that included a large number of burkas, which are of course worn by the voters he thinks will put him in number 10!) reminded me of the Hyde Park rantings of the 60’s, which were orated mainly by leading dropouts, to gatherings of other motely unwashed dropouts, who opted for anything other than actually getting a job! Future Prime Minister? I would make a better Prime Minister than this antiquated leftie. Vote for meee!

Trump just about managed to retain his dignity when voicing his opinion of that other childish creep, London’s Mayor Khan, who he described as a ‘stone cold loser.’ I thought this was pretty mild, considering he once again encouraged the raising of that ridiculous ‘blimp’ over London, which just about sums up the mentality of a man who doesn’t like Trump, purely because the American President doesn’t want his country overrun with benefit chasing Muslim or Mexican immigrants! As for Trump’s unfortunate boo boo, with his remark on the NHS.

This was obviously a mistake in the heat of a Q and A session, from a man who comes from a country far away that is awash with the initials of whole conglomerations of different companies. NHS could have been the title of the Nuneaton Haricot Sowing organisation for all he knew. As soon as he realised the error, the following day he made it absolutely clear that there would be no meddling in the NHS whatsoever. No, I think Trump and his extremely sophisticated First Lady, made a very favourable impression on this visit. I just hope the antics of a few utterly childish members of our so-called leaders and their motley rag tag of supporters, didn’t give him the impression that the majority of the British people all follow the same lines of infantile persuasion.