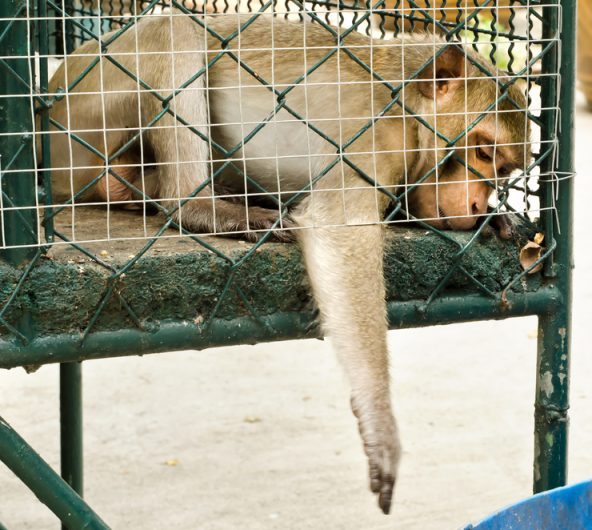 THE FOOTAGE was released on October 11 and includes the hellish treatment used on innocent animals in a testing facility near Hamburg, Germany.

The company investigated is contracted for toxicity testing for pharmaceutical companies.

The investigation was organised by animal welfare organisations SOKO Tierschutz (based in Germany) and Cruelty Free International (based in the UK) and involved getting someone employed at the facility in December last year. This undercover investigator worked there for four months and filmed incidents and the company’s testing procedures with a hidden camera.

The undercover investigator remains anonymous but has recounted the “nightmarish prison” where the animals are kept.

“I heard that LPT was looking for jobs so I seized the opportunity; if you are involved in animal welfare activism you won’t pass the background checks. I knew it would be hard, but I thought somebody had to do it, to bring out the truth. I wanted to uncover the information that people need; I believe it’s not right in a democracy to keep entire industries shrouded in perfect secrecy.

So I started work there as an animal technician assistant. My job was to feed, clean, restrain and transport animals, and to help with the testing.

The experience was extremely shocking. It’s like a strange, secret world. The suffering, the hundreds of bored dogs barking, the monkeys in battery cages… It’s a nightmarish prison.”

Friedrich Mülln, who co-ran the investigation, founded SOKO Tierschutz 7 years ago, stated that LPT had been one of their main targets for years

“The LPT is one of the most secretive labs in Germany. Finally, in December last year, we managed to get an investigator inside.”

“In animal testing, a lot is allowed by law, but there are some restrictions. But what we found enters the territory of clear criminal activity.”

In Section 17 of the German Animal Protection Act, it says inflicting considerable pain on a vertebrate is punishable by three years in prison. In the footage, you can clearly see a worker smack a monkey’s head against a door frame, and there are plenty of other examples of considerable suffering being inflicted.

The investigators for SOKO also discovered cases of fraud, another extremely serious crimes. It appears the lab falsified records of some of the dead animals which is extremely dangerous because the death of this animal could be a side effect of the drug being tested but if not recorded properly it could corrupt the whole study and have serious effects on medicine then used on humans.

Unfortunately, toxicity testing methods like that revealed in the investigation is just a reflection of what often goes on behind closed doors in other laboratories.

At least 115 million animals are used worldwide in testing every year, and Germany and the UK are in the top ten of the most animals used.

What is just as shocking is that testing reports in general reveal the failure rate of drugs tested on animals is 90% which would suggest that animal testing is near useless and yet the suffering continues.