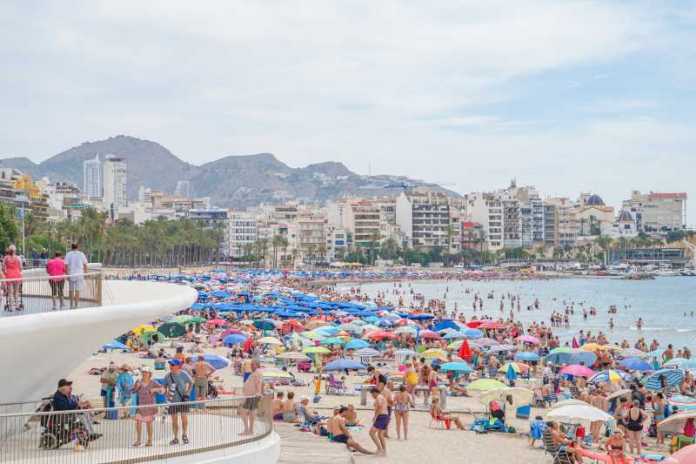 LEADING ROLE: Benidorm and the Costa Blanca will play a prominent role in the promotional campaign. CREDIT: Shutterstock

THE uncertainty generated by the Brexit saga has prompted the Valencia regional government to launch a major promotional campaign focused on the British market.
Under the slogan ‘’Always Brit Friendly’, the campaign will aim to lure UK tourists by presenting the region as a hospitable and safe holiday destination.
Unveiling details of the promotional plans in Benidorm, Valencia region Tourism secretary Francesc Colomer revealed more than €300,000 will be invested in advertising in British newsapers, magazines and on TV and digital platforms between now and February 2020. There is also an online strategy designed to improve the positioning and relevance of Valencia region in the British market.
In addition, this week a delegation from the Valencian Tourism department was at the World Travel Market in London, and for the beginning of December has another “important” promotional activity in the British capital.
In terms of the campaign images, Colomer explained that Benidorm and the Costa Blanca would play a prominent part as the main destinations for holidaying Brits.
The promotional action will be directed particularly at 25-65 year olds planning a break, who are looking for somewhere different, who consider themselves adventurous and active, who like guided trips and who want to be able to buy luxury and designer gifts.
The Tourism secretary stressed the campaign was based on what he called “emotional bias”, aiming to “reinforce the empathy with the tourist as a fundamental element for sustaining the sector”, at the same time as giving out a “welcoming, friendly message” so the British feel “safe and worry-free in the Valencia Community.”
Colomer said he was convinced the campaign would be successful because “the British tourist adores Spain, the Costa Blanca, and very especially Benidorm.”
The goal is that they “continue wanting to come”, he added.
Benidorm and Costa Blanca Business Association Secretary General Nuria Montes, who pointed out the campaign had been planned before the latest Brexit extension, said people were “tired of the Brexit effect and of so many calls of alarm”, and would continue with their holiday plans as normal.
In fact she had good news for the sector, reporting a recent “slight increase” in reservations and a “positive” forecast for the winter season.
The secretary general echoed Colomer’s comments that the campaign centred on sending British tourists the message they “will always be welcome.”