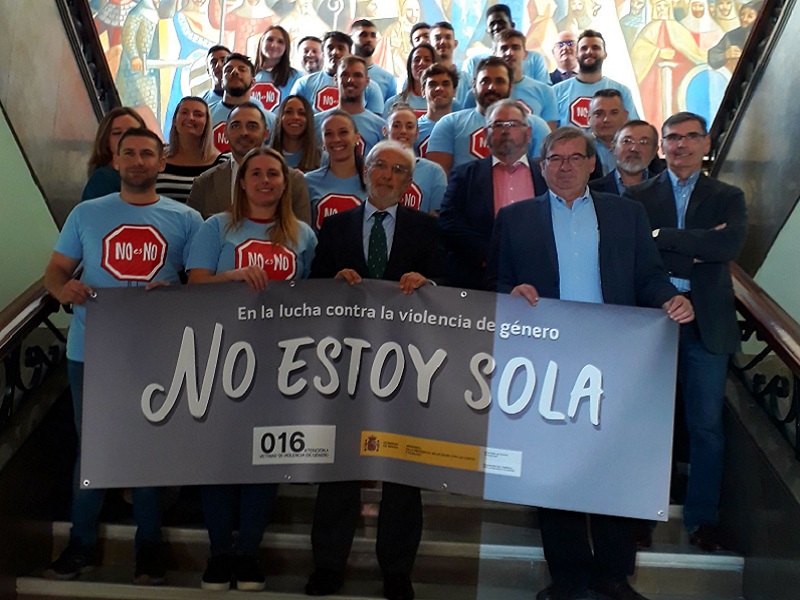 FIVE Almeria sports clubs have given their backing to Government campaigns aimed at fighting gender-based violence and sexual aggression.
Representatives of the UD Almeria football side, Unicaja Almeria Volleyball, Almeria Rugby Union, Almeria Basketball Club and Mytos Judo Club visited the offices of the Government Sub-delegation in Almeria this week to show their support for three Secretary of State for Equality campaigns: ‘No es no. Respeta los límites, sí o sí’ (No is No. Respect Limits. Yes or Yes) against sexual violence; ‘Pasión no es posesion’ (Passion isn’t possession) aimed specifically at adolescents; and ‘No estoy sola’ (I am not alone), which is focused on gender violence and making victims aware of the available institutional resources which could help them out of this situation.
The main objective of the campaign focusing on the problem of sexual violence is to raise awareness and inform men about crossing the sexual aggression line and everyday attitudes and behaviour which can make sexual violence seem normal and consensual. This is the Spanish Government’s first campaign of this kind directed specifically at men, the Sub-delegation reported.
The campaign Passion isn’t possession initiative is all about making young people think about the importance of having intimate relations which promote freedom and full respect, the Sub-delegation explained.
A rap-styled campaign ad identifies forms of violence which are unacceptable, but commonly tolerated in sentimental relationships.
The third campaign wants to send a message of support and confidence in the institutions to gender-violence victims, on the basis this is key to tackling the problem.
“Breaking the silence and ending the violent relationship, which at times can last eight years or more, according to the figures from the Gender Violence Government Delegation, is only possible if there exists a professional specialist environment which can be trusted and IS absolutely safe for the women”, the Sub-delegation stressed.
The Sub-delegation also highlighted the fact this is the first campaign which puts the focus on the social and health institutions, with a view, the Sub-delegation said, to avoiding the message the legal route is the only way out of a violent situation.
Speaking at the campaign presentation in the provincial capital, Government Sub-delegate Manuel de la Fuente stressed the battle against gender-based violence was not an issue for just one government or political party, but “a matter which should concern all Spanish society and against which we should all struggle until its eradication and not allow not even one step backwards.”
There are currently 2,103 active cases of women in Almeria province who are victims of gender violence and who are under the protection of the State. Since 2007, 13,188 women living in the province have made use of this protection on finding themselves in a violent situation.
Official figures also show that 35 women in Almeria have died at the hands of their partners or former partners since 2003. In addition, two children in Almeria have died as a result of gender violence since 2013 when records on this kind of violence began.
De la Fuente ended by thanking the sports clubs for their participation in promoting the three campaigns.
“We are very aware of the value of your collaboration and of the impact on a large public, and especially young people”, he commented.
The players will wear shirts with the ‘No es no. Respeta los límites, sí o sí’ slogan  in the warm- ups for their matches, which De la Fuente said would give “enormous visibility” to the campaigns.