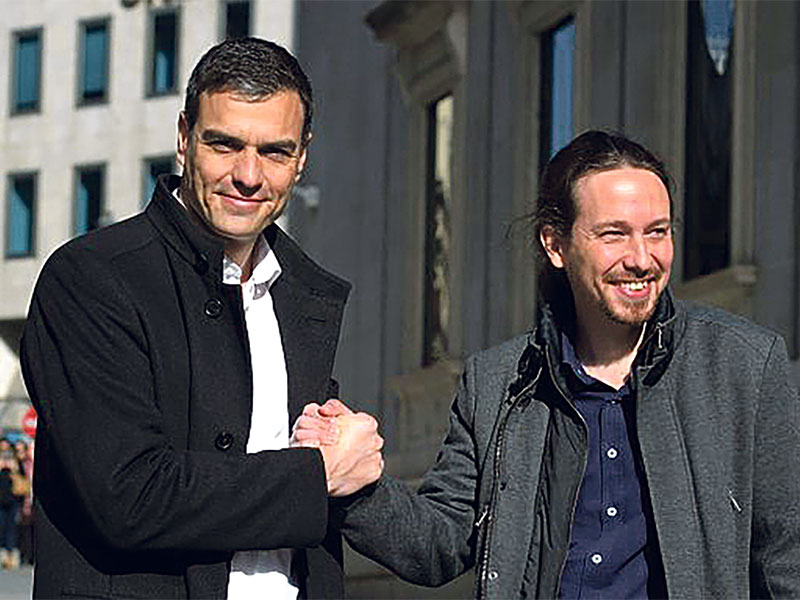 A Happy New Year to you from the islands, where we’re happy with 2020 so far, despite general festive season excesses and, in my case, acute tobacco withdrawal symptoms.

Happy because, regardless of the buffoon-led political circus currently playing in Europe, the USA, Australia and other countries old enough to know better, Spain has avoided the dangers of erm… austerity populism, I believe it’s called these days, and finally formed a lefty coalition.

In a period of retreat for the European left, this new government constitutes the most left-wing administration across the entire continent. So what makes Spain different?

I’d guess it’s the memory of the country’s 40-year dictatorship naturally lingering on. It lasted until 1975, so a large chunk of the Spanish population remembers the reality of a right wing regime and hesitates, regardless of politics, to go back there thanks.

Other Europeans have apparently forgotten the pre-world war nationalist posturing that brought death to an estimated 75 million people, poppies and Remembrance Day ceremonies notwithstanding.

The memory was probably wiped by the post war boom.

The USA possibly forgot and placed trust in a reactionary clown because its warmongering is strictly limited to faraway, foreign places, but surely us Europeans might hear alarm bells ringing through all this modern nationalist blah?

Although, humans do have short memories. Just one and a half generations after a natural disaster almost anywhere, we choose to rebuild communities and bring up our kids in exactly those dangerous areas programmed to blow again.

So, if we never learn, how will this first Spanish coalition government in 80 years, presided over – in my humble lefty opinion – by sound chaps Pedro Sanchez of the centre-left Socialist Workers’ Party, and Pablo Iglesias of further left ‘United We Can,’ prosper?

These two do boast the prerequisite number of functioning neurons, a notion of history and social justice and far superior hairstyles. None of that laquered, boyishly tousled stuff. Sanchez sports a non-denominational classic cut and Iglesias a reassuring pony tail. We all have our criteria.

They’ll have their work cut out. Coalition is a known but forgotten concept in the land of stick-rigidly-to-your-views-and-shout-the others-down as a negotiation tool.

“The parties on the Right and the media arm of the economic powers are going to hit us very hard with every step we take, however small. We will be governing in minority within an Executive shared with the PSOE… And, again, there will be those who invest many millions of Euros and devote many hours of television to trying to demoralise, frustrate and convince us that we cannot succeed,” says Pablo Iglesias, but I have enormous confidence in this political science university lecturer and his pony tail and hope they’re still in power when my Spanish nationality’s organised. I’d like to enjoy the changes they make. If I can stop smoking, their very intelligent plans to bite the bullet and legalise voluntary euthanasia may turn out to be top of my favourites list!