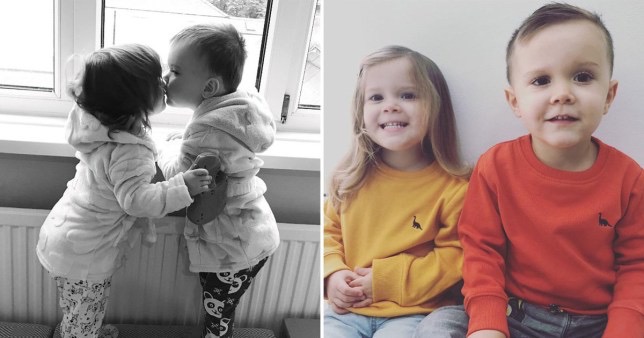 Fox Parkin who is three years old was diagnosed with a rare form of leukaemia just after Christmas Day and has to receive lifesaving treatment.

Fox had to be separated from his twin Winter because of the procedure. Fox faces months of horrible treatments which includes having intravenous arsenic, a naturally occurring element which can be medically effective, and just before he was wheeled away he had to say goodbye to his beloved sister.

Parents Holly and Tom from Plymouth, captured the heartbreaking moment the youngsters said goodbye. According to Mum Holly, Fox and Winter who have just turned three were happy, healthy twins, who always bounced back quickly from childhood bugs. But in October 2019 Fox developed tonsillitis, and by Christmas Day Mum Holly noticed a rash on his leg, even though he appeared to be better, she thought it was meningitis.

She phoned 111 immediately and arranged to go to Hospital where doctors agreed Fox was very unwell, although they did not think he had meningitis. However before the family could get back to the Christmas celebrations, the family were called back to the hospital.

‘With how quickly they’d called, I knew it wasn’t going to be good.’ explained Holly. When they arrived medics explained that Fox has an abnormally low blood cell count and would require a transfusion. Tom and Holly stayed overnight at the hospital whilst they waited for the results. The next day the consultant explained the results to the parents.

Holly said: ‘I knew then it wasn’t good news when we were led into this side room with tissues and sofas, my heart sank. Up until that moment we held hope the the doctors could be wrong , that Fox may not have what they said he did. But the results showed he had a form of leukaemia called APL. It’s very rare. The hospital told us they had’t seen a case themselves in years.’

Fox spent a night on the high dependency unit, but was transferred to Bristol Royal Hospital  for Children for a bone marrow biopsy, to determine exactly what form of the disease he had.

Due to Fox’s weak immune system, his parents have to be careful on who can visit him in hospital, which means he has been parted from his sister Winter for the first time in his life.

‘They’d never spent a night apart before this, so it’s been really hard.’