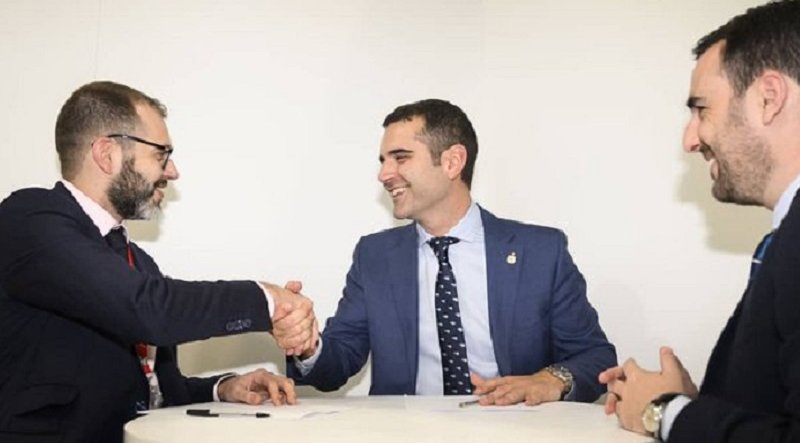 DETAILS: The campaign will focus on social media, plus a direct mailing to 40,000 British who have already travelled with Jet2 to nearby or similar destinations CREDIT: Ayuntamiento de Almeria Twitter @aytoalm

ALMERIA council and Jet2 have rubberstamped an agreement on promoting the city and El Toyo to the UK tour operator’s millions of British customers.
Almeria Mayor Ramon Fernandez-Pacheco and Jet2 representative Ricard Querol signed the deal at this week’s FITUR international travel fair in Madrid.
The city authority revealed the €24,000 publicity campaign will be financed 50-50 by the council and Jet2 and will focus particularly on social media, highlighting the strength of platforms like Facebook and Instagram.
It will also include a direct mailing to approximately 40,000 people in the UK who have already travelled with Jet2 to other destinations near to Almeria or which have characteristics in common with the province.
“Jet2 has become the main British tourism operator following the collapse of Thomas Cook. Thanks to this agreement there will be an effective promotion directed at British people who have already travelled to Spain or who carry out searches on travel to Spain and Andalucia”, Fernandez-Pacheco explained.
The council reported that Jet2 brought some 25,000 British tourists to Almeria province last year, and expressed its confidence the promotional campaign will be a success.
The provincial capital authority said its City Promotion department and the EMAT Almeria Tourism Municipal Company had intensified contact-building efforts since September to counteract the effects of the disappearance of Thomas Cook. Work on sorting the agreement with Jet2 stemmed principally from Almeria city’s participation in the World Travel Market fair in London in November.
The city council said its main aim through the campaign is to attract British visitors in the summer and early autumn.