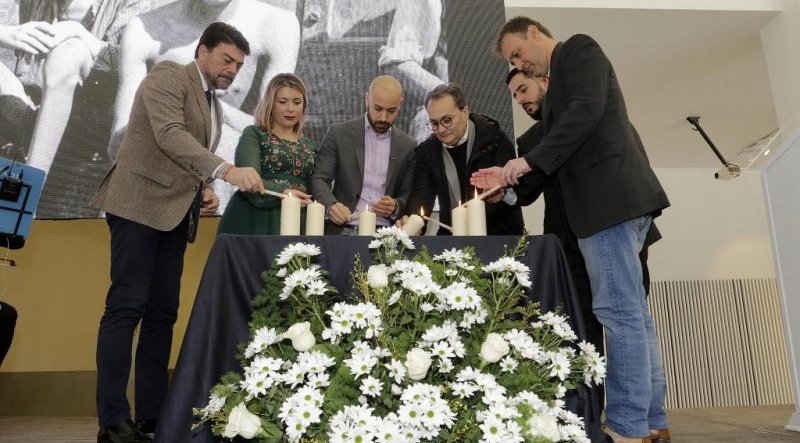 IN MEMORY: The millions of Holocaust victims were remembered in Alicante on Tuesday. CREDIT: Ayuntamiento de Alicante

A TRIBUTE to the victims of the Holocaust was held at Alicante city’s Seneca Building today (Tuesday, January 28), with a clear message that society should learn from the horrors of the past.

On the day on which the General Assembly of the United Nations officially proclaimed the International Day of Commemoration in Memory of the Victims of the Holocaust, the City Hall sounded sirens before a minute of silence.

This was followed by an emotional performance in collaboration with the Oscar Esplá Higher Conservatory of Music.

Mayor, Luis Barcala, wanted to remember “the six million people of any condition, age, sexual tendency or belief who were simply and vilely killed in one of the most dramatic episodes of our contemporary history as Europeans.”

He added: “It is necessary to remember them with true feeling. If it is clear that nothing can, nor should, justify that holocaust of that time, nothing can and should not justify that today.

“Unfortunately, there are people or countries that suffer that unjustified hatred. Let us denounce, all and all, any attempt to break the coexistence between human beings, let’s fight against totalitarian ideas, clearly and emphatically.

“Each one of us, in our fields of work, in our social circles. Our grain of sand, sincerely believe it, should contribute to build a powerful wall against intolerance. ”

Barcala went on to say that the best way to do this is to defend freedoms, human rights and democracy.

The Councillor for Culture, Antonio Manresa, also spoke of the need to learn from the past.

“There are no words to express the horror that the Nazi regime sowed during World War II, which meant the extermination of six million people: women, men, girls and boys of the community Jewish and also the persecution and murder of millions of gypsies, homosexuals, disabled people and members of many other groups.

“There are no words, but we must look for them because we do not want to forget that terrible episode in the history of Europe, so that it never returns to repeat itself. ”

An exhibition ‘In Memory’ will be in place in the Seneca building until February 27, organised by Alicante Council’s Department of Historical Memory.

It consists of 19 panels, with two photographs showing the harshness of the acts perpetrated by the Nazis, the deaths and the terrible life that millions of children, women and men went through.
Places on guided tours can be reserved at  [email protected]  or by phone 965596296