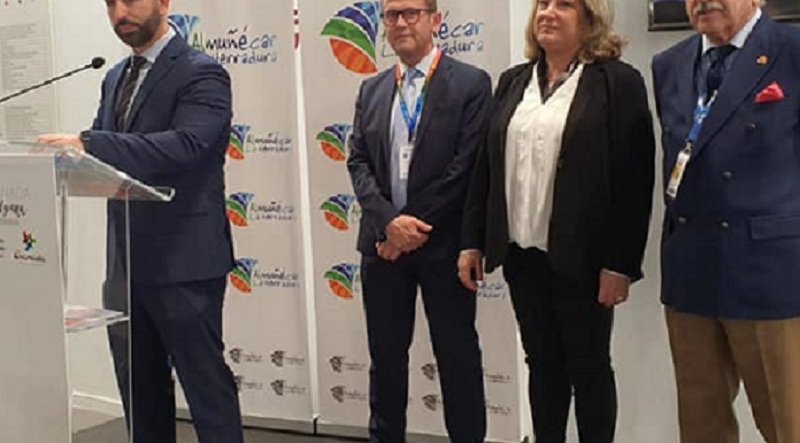 REALITY: The hotel is set to open its doors in the near future. CREDIT: Ayuntamiento de Almuñecar

ALMUÑECAR has officially unveiled details of what is set to be the Costa Tropical’s first five-star hotel.
Almuñecar Mayor Trinidad Herrera, Tourism councillor Daniel Barbero, Granada Tourism delegate Gustavo Rodriguez and the promotor Trinitario Betoret, presented the Gran Hotel Cortijo de Andalucia project at the recent FITUR international travel fair in Madrid, promoting it as a top class establishment.
The delegation maintained the hotel will open its doors soon now that the legal issues in which the project was immersed some months back have been resolved.
The Tourism councillor expressed his satisfaction at being able to confirm the project is now a reality and that works on the hotel are due to resume shortly. He also stressed how pleased he was that the problems concerning the project are “now part of an unfortunate past.”
Barbero explained that the hotel is located on an 18,000-hectare plot, most of which is made up of gardens and relaxation areas, perfectly integrated with the surroundings. The building is 80 per cent completed he said, and has 92 rooms of nearly 50sqm distributed on three fully accessible floors.
“I would like to share a feeling with you”, he commented in this FITUR presentation.
“When you visit the works on this hotel it is as if calm, serenity and nature take you over.
“It is a marvellous place, from where you see the countryside and the sea forming an unequalled blue-green stamp, which the clients of his grand tourist complex will soon be able to enjoy.”
The councillor pointed out it will be an establishment for a select and demanding clientele. He also revealed facilities will include restaurants, a heated indoor pool, a thermal spa, tropical fruit gardens, a bamboo sensory garden, a bar next to the outdoor pools created in the form of a beach, a library and a recreation area. As a health and well-being hotel it will also offer a specialised medical and therapeutic service.
What’s more, Barbero said, “it will have a zone for congress tourism, with extensive space for meetings and conferences, with all the necessary comforts and technology.”
Businessman Trinitario Betoret took time at FITUR to thank the local authority for its support for the project, “providing us with a solution so that we can now fulfill our dream.”
The Tourism delegate described the news about the hotel project as “a great day for us, for Almuñecar and for all the Granada Costa Tropical tourism sector.”
Thanking the promoter, the government, the municipality and all the Costa Tropical and the province, Rodriguez commented, “a hotel of these characteristics could not remain paralysed. Our congratulations and our full support for all those who have made it possible, and above all to the Betoret Catala family.”
Trinidad Herrera referred to the “many obstacles” which had stood in the way of the project“, describing it as “high quality, with all the necessary services and ingredients for being an idyllic hotel for health and well-being.”
The Mayor also thanked the Betoret Catala family, “and all the entrepreneurs who support our municipality and who work hard to present an image of quality, which has made us into a reference point in Andalucia and Mediterranean tourism.”