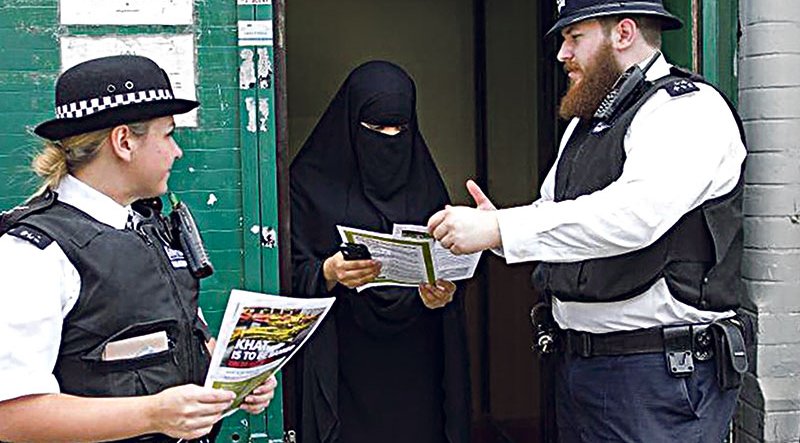 IF the UK doesn’t grow some cahonies and get a grip it will drown under a suffocating morass of political correctness from which it will never emerge again. This latest directive truly does take the whole tin.

The utterly common sense starved British plod, is now encouraging members of the public to report ‘hateful white people, even if they have committed no crime’! They have actually released a short cartoon video, which depicts a number of extreme acts by snarling white thugs as examples of the ‘hate’ they consider unacceptable.

One shows a man pulling off a Muslim woman’s hajib. Another depicts a crew cut individual abusing a black shopkeeper and a further example demonstrates a crestfallen black schoolboy being refused permission to board a bus.

Can’t these naive morons get into their thick, left wing biased mentality, that this ‘cartoon’ is in itself reverse racism at its very worst? Can they also not understand quite how open to abuse a directive of this nature can be?

This is an invitation for all ethnic minorities to report the white population for just about anything they consider not quite to their liking. An opportunity to create a positive tsunami of time wasting frivolous racist accusations.

How long before the complaints begin to pour in that someone felt they were, looked at in a ‘wrong way’ or ‘bumped into’ purposely? We already had the case of the Muslim person who considered a driver honked his horn aggressively.

That accusation could be considered a near homicide compared to the level of nonsense claims that could now almost certainly descend on the authorities.

Can our esteemed snow-flake appeasers also not understand that rubbish of this ilk drives even more of a wedge between the beleaguered indigenous population and its ethnic counterparts; pushing them even further apart? And what about the other way around? What about the highly objectionable verbal accusations of being ‘privileged white men,’ publicly voiced by black lady TV panellists of late?

I don’t hear anyone complaining about these blatant racist outbursts. Well of course not. Can’t upset the minorities can we?  Thank the Lord that with my choice of residence I don’t have to put up with it all.

Mind you, only last week I was actually told to ‘go back to my own country.’ Although I am aware that there are recourses in Spain for this type of behaviour, I simply shrugged it off as an ignorant isolated remark. A brainwashed UK citizen would probably have run crying to the authorities and got the perpetrator six months!

Fortunately Spain has got its priorities right. Not a great deal of ‘nanny state’ nonsense over here, I’m delighted to say. What a shame the country I love has got it all so wrong, and allowed the snowflakes and ‘wokers’ to bring it to its knees.

And a Happy Brexit to you all!