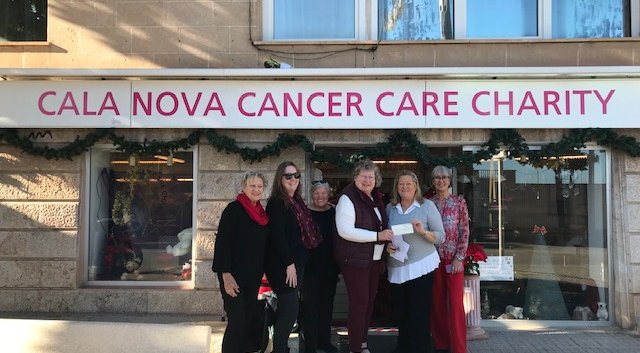 A cheque being presented outside of the Calanovs Cancer Care shop. Credit: Calanova Cancer Care.

WORLD CANCER DAY is marked on Tuesday, February 4 in a global uniting initiative to raise awareness on one of the greatest health challenges in history.
To honour all the inspiring efforts made on the island which give visibility and support those affected by the disease, we at Euro Weekly News wanted to highlight the work of Calanova Cancer Care, who last year raised a total of €69,500 for cancer charities in Mallorca.
Just before Christmas, a cheque for €3,000 was presented by Calanova Cancer Care’s President Angela McGrath to Krista Hyer, the President of the Cancer Support Group, an organisation which provides round-the-clock support and invaluable initiatives to help those diagnosed with the disease.
A cheque for €3,000 was also presented to Jackie Codd, the President of Age Concern, a non-for-profit organisation which assists in the needs and interests of older people. Both Krista Hyer and Jackie Codd were awarded with a British Empire Medal for their unswerving dedication and services to Britons living in Mallorca.
The Calanova Cancer Care shop also participated in inspiring projects, which included all of their unsold summer clothes being donated to communities affected by hurricanes in Cuba, delivered personally by Palmanova Doctor Angel Avila Camejo. In addition, the Spanish Cancer Care Association (AECC) donated T-Shirts adorning their logo to the Cuban Cancer Association which were handed to performers who dance to raise funds for those suffering with cancer in Cuba.


At the end of last year, the shop was honoured with a plaque from the Association for Parents of Children with Cancer in the Balearic Islands (ASPANOB), presented by Jaime Coll, the President and Founder of the entity.

Calanova Cancer Care has praised the volunteers who have given up their time to help the charity, in addition to residents who have generously donated their belongings and those who have visited the shop.
From February, all men’s and women’s clothes will be on sale with a 50% discount, where citizens are warmly invited to pay a visit and browse their fantastic offerings.