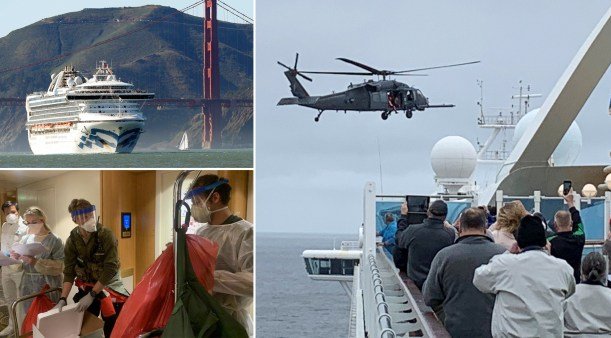 Authorities in the US are preparing to test passengers on the coronavirus-hit cruise ship The Grand Princess after 21 people on board tested positive for the illness.

Some 140 Britons are among those on board. US vice-president, Mike Pence, said on Friday that the Grand Princess, currently carrying more than 3,500 people, had been directed to a non-commercial port for testing.

So far 45 people on board the ship off the Californian coast have been tested, with 19 of those diagnosed with the virus being crew members.

Lisa Egan, whose 90-year-old father is on board, called for the ship to be evacuated. “Keeping people on board is going to be a death sentence for many,”

Donald Trump appeared to suggest he wanted to see the ship remain off the coast to keep the country’s infection numbers down, The Grand Princess is stranded in international waters off the coast of California.

Officials are deciding where to dock a cruise ship floating off the coast of California after 21 people on board tested positive for coronavirus. There are 140 Britons on board and all passengers have been ordered to remain in their cabins.

A military helicopter crew lowered test kits on to the 951ft Grand Princess by a rope on Thursday and later retrieved them for analysis as the vessel waited off San Francisco, under orders to keep its distance from shore.

US President Donald Trump, speaking at the US Centres for Disease Control and Prevention in Atlanta, said he would have preferred not to let the passengers disembark onto American soil but will defer to the recommendations of medical experts.

He said: ‘I don’t need to have the numbers double because of one ship that wasn’t our fault.

‘And it wasn’t the fault of the people on the ship either. Okay? It wasn’t their fault either. And they are mostly Americans.’

A 26-year old woman returning from London has tested positive for coronavirus in Vietnam, after the country went 22 days with no new infections.

The Vietnamese woman, the country’s 17th case in total, has been quarantined and is undergoing treatment, the Vietnamese news outlet VN Express reported.

Authorities said the patient had left Hanoi’s Noi Bai airport on 15 February to visit family members living in London. Three days later, she travelled from London to Milan City, in the province of Lombardy, Italy, and returned to London on 20 February.

On 25 February, the woman travelled from London to Paris to visit her sister. She contracted a cough on 29 February, but did not see a doctor.

On 1 March, she reportedly felt body pain and fatigue, but it was unclear if she had a fever. The same day, she boarded a flight from London and landed in Hanoi on 2 March.

Vietnamese authorities held an emergency meeting about the case, as 17 doctors who had been in contact with the woman were being isolated, Public Health England said it could not comment on individual situations.