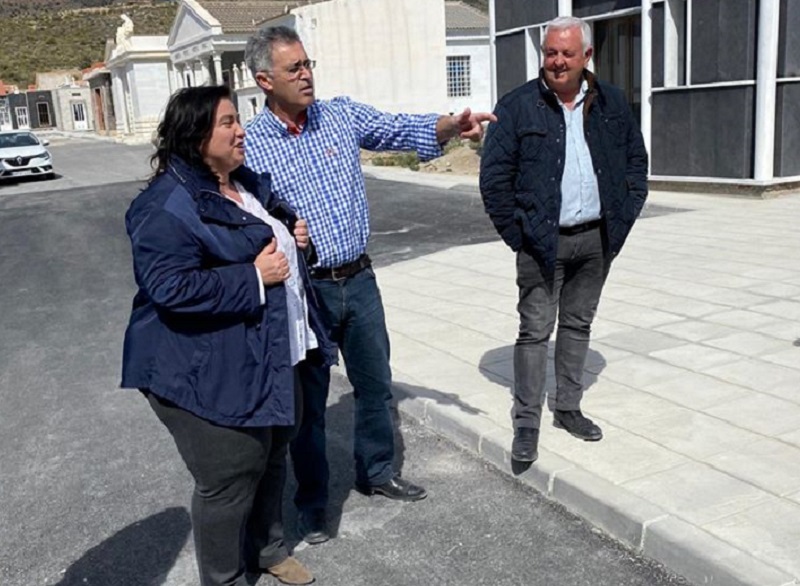 KEY ISSUE: Both the Junta delegate and the provincial deputy said helping to prevent population decline in small and inland municipalities is a top priority for the administrations. CREDIT: Ayuntamiento de Olula del Rio Facebook @AyuntamientoOlula

INVESTMENTS in a plan to create jobs in rural areas of Almeria are a key way to help inland municipalities maintain population levels, the Junta de Andalucia territorial delegate for Tourism, Regeneration, Justice and Local Administration stressed during a recent visit to Olula del Rio.
Jose Luis Delgado was in Olula to see how some of the works being carried out in the municipality under the PFEA Rural Employment Development Plan are progressing.
Actions include reforms to the cemetery, improvements to public spaces and extensions to the Ver de Olula Association and a regional special education centre.
The Junta has contributed a more than €52,000 subsidy, specifically to finance the costs of the materials needed for the works.
Delgado described the investments as “essential in the fight against depopulation and for the development of municipal projects.”
“The Junta de Andalucia has as an absolute priority the sustainable development of the villages, as well as the struggle against the depopulation of the rural world, as the increase of the investment in the PFEA shows”, he affirmed.
While in Olula, the territorial delegate met with Mayor Antonio Martinez Pascual and provincial PFEA deputy Matilde Diaz.
The deputy echoed Delgado’s views, commenting, that the employment plan, which is managed by the Diputacion de Almeria, plays a vital role in “fixing population” in inland municipalities and those with the smallest number of inhabitants.
“Thanks to the PFEA we are creating equal opportunities among Almerians because it boosts their economies, and also allows for the improvement and modernisation of basic municipal infrastructure”, she said.