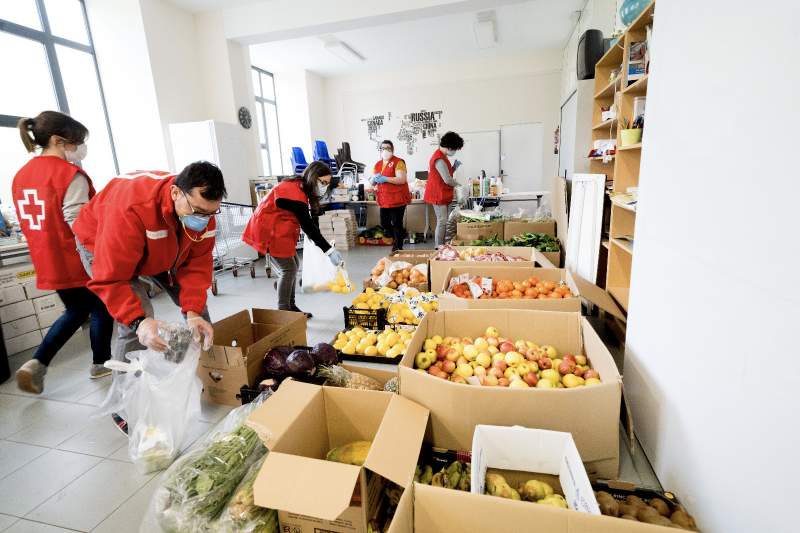 AID IN A CRISIS: Requests for help have risen by 30 per cent in the last few days. CREDIT: Cruz Roja Twitter

REQUESTS for aid during the State of Alarm have tripled in the Alicante Province since the start of the Covid-19 pandemic.
Caritas now receives three times as many calls and the Red Cross say they are supporting twice as many people as before. Alicante Food Bank has increased its distribution by up to 30 per cent in recent days to reach more people at risk of exclusion.
The support providers warn “prolonged confinement and its economic consequences” are beginning to take their toll.
The main NGOs working to alleviate the impact on the most vulnerable members of the community are already noticing people, who until now could support themselves, asking for help.
Representatives revealed these are mainly people who used to work cash in hand and are now unemployed and not receiving any kind of benefits, as well as street vendors and people waiting for ERTE payments.
Caritas and Red Cross say they are “doubling their efforts to respond to the situation.”
Prior to the health crisis, Red Cross supported 29,248 people in the province, and within its Responde programme set up in response to the pandemic, has helped a further 11,304.
The help varies, from support over the telephone to shopping and collecting medicines for the sick and elderly and providing food aid, and demand increased by more than 40 per cent between March 14 and April 14.
In this four week period, Red Cross has delivered basic necessities – food, medicines, children’s products – to an additional 2,126 on top of 7,470 people already on its books.
Caritas has also seen the demand for even basic support soar.
They set up a free telephone support line shortly after the State of Alarm was declared and initially received about 50 calls.
But now the phone rings between 100 and 150 times, and the NGO provides basic necessities or financial support.
A spokesperson said “this has only just begun,” adding that even if the State of Alarm is lifted, “the situation of these people will not return to the normality of before the coronavirus, but we will continue to support them.”
Food Bank has reopened distribution points that were closed, “thanks to volunteers” and said there has been an increase in applications as the weeks have gone by.
Caritas needs more volunteers, who can sign up at [email protected]. To request assistance, call 900 921 936.
To find out more about Red Cross Alicante, visit:
www2.cruzroja.es/-/lanzamos-el-plan-cruz-roja-responde-frente-al-covid-19