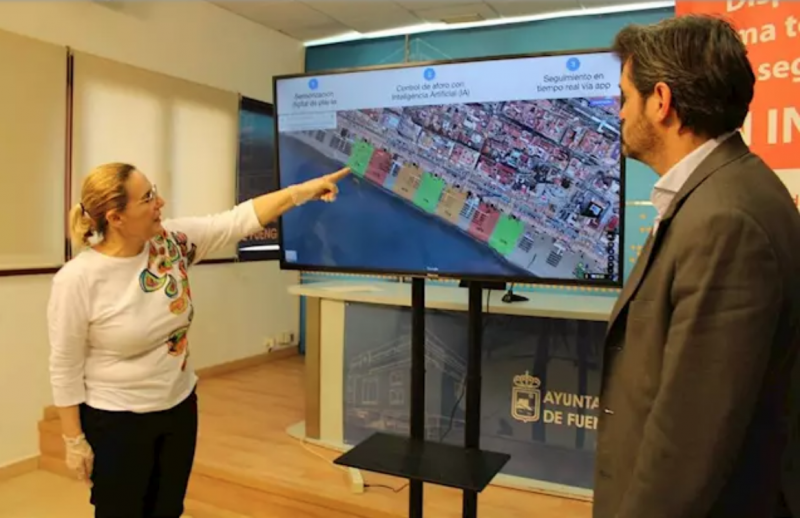 The Fuengirola Town Hall has said they aim to use artificial intelligence (AI) in order to control the capacity of beaches and other public spaces.

THE Costa del Sol municipality has said it will use a computer program developed by a local company which allows for real-time information regarding the levels of attendance at beaches to be analysed in order to avoid crowds and minimise the risk of possible Covid-19 infections.

The mayor of Fuengirola, Ana Mula, has detailed that “it is a pioneering initiative in our country and will be launched in time for the reopening of beaches, whenever the competent health authorities allow it.”

The computer application has been presented by the mayor of Fuengirola alongside the director of a Juma, a local technology company, Carlos Moreno. Both individuals have disclosed the functionalities of this computer programme which is “aimed at guaranteeing the safety and compliance with some of the elementary prevention measures to avoid Covid-19 infections.”

Mula also noted that because the “phases of the de-escalation plan proposed by the government, contemplate scenarios in which more or less of the population can congregate in the same area” they must guarantee everyone’s security conditions when doing so.

She contends that this security work is not only exciting and innovative but, ultimately, it is essential for the safety of neighbours and any visiting tourists during the summer.

Moreno explained that this software works by using artificial intelligence sensors that are installed in streetlights. He added that “between 40 and 50 sensors will be needed for the seven kilometres of beach” in the city.

From there, virtual grids are created in which there is a maximum capacity for occupants. Alongside this, the 3D volume of people entering and leaving these spaces is measured, as well as the amount of people entering the measurement grids.

“The sensors have internal processing, so they are able to draw virtual grids, which in turn create a certain capacity according to the distance measures which have been recommended by health authorities. These grids and those calculations will be able to determine if an area is saturated or not. Any citizen may also access this information in real time by downloading a free mobile app,” he assured.

The results of the calculations are also carried out in real time in order to warn citizens about means of occupancy through the use of percentages and colours. Therefore, “if everything is correct it will be marked in green; when a grid reaches 75 per cent it appears in yellow, and when it reaches 100 per cent of maximum capacity it will turn red,” points out Moreno.

The first environment where this system will be adopted is Fuengirola’s beaches as this is one of the most used areas by residents and a popular area in which to spend free time.

Moreno has advanced that this same system “can be applied to any public space: from shopping malls to hotels or venues where public events are held.

“In order for us to be able to reach the final stage in which Spain’s government will allow us to go to the beach… we must all do our part. Once again, I ask for collaboration, patience and responsibility from all the Fuengiroleños and that they fulfil the norms dictated by the Sanitary Authorities. It depends on all of us so that we may enjoy Fuengirola, our beaches or any space in the city,” concluded the mayor.