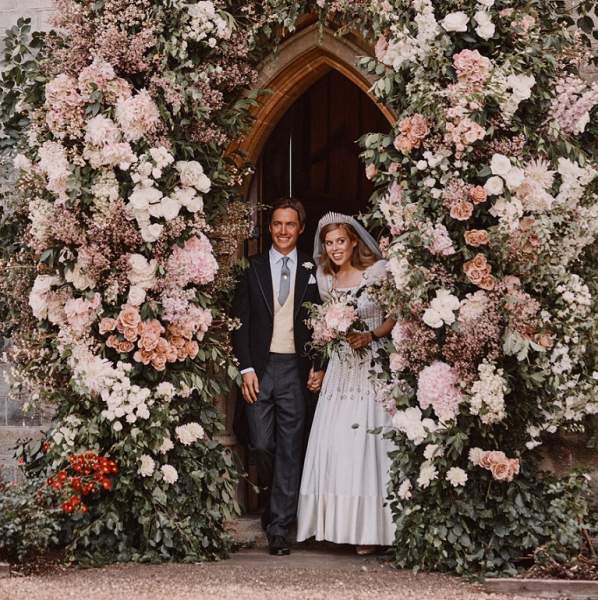 Prince Andrew broke cover yesterday to walk his daughter, Princess Beatrice, down the aisle, but there’s no sign of the Duke in official snaps.

The Duke of York makes an appearance

Princess Beatrice’s father, Prince Andrew, made a rare public appearance and walked her down the aisle. Andrew has been keeping a very low profile since the arrest of Ghislaine Maxwell who has since been denied bail and awaiting trial on a whole list of serious charges relating to the Jeffery Epstein case.
Mozzi’s son, Wolfie, was his best man and served as a pageboy. The bride and groom’s mothers each read a poem: “Sonnet 116” by William Shakespeare and “I carry you in my heart” by E.E. Cummings, both favorites of the couple.
A bible verse, “St. Paul’s First Letter to the Corinthians Chapter 13, verses 1-13” was also read aloud as part of the service. And in accordance with government guidelines, the National Anthem and hymns were not sung but music was played.

Queen Elizabeth II and Prince Philip stood alongside Princess Beatrice and Edoardo Mapelli Mozzi outside The Royal Chapel of All Saints at Royal Lodge, Windsor, England, after their wedding on Saturday, July 18, 2020. By that time Prince Andrew was already making his exit back to his private lodge, the family album will therefore NOT be complete!

“The wedding took place in accordance with all relevant Government Guidelines,” a statement provided by Buckingham Palace Friday said.

Beatrice got engaged to Mozzi, CEO of architecture/design studio Banda Property, in September while on vacation in Italy.After their engagement announcement, the property tycoon, 37, posted photos on his Instagram account with a sweet caption: “You will never be alone my love, my heart is your home. Hand in hand, today, tomorrow and forever.”

It is believed to be the first time the Queen, 94, and Prince Philip, 99, have attended a family gathering since lockdown began.

For the ceremony, Beatrice wore a vintage Peau De Soie taffeta dress, in shades of ivory by Norman Hartnell, on loan from the Queen, and trimmed with duchess satin and encrusted with diamante.