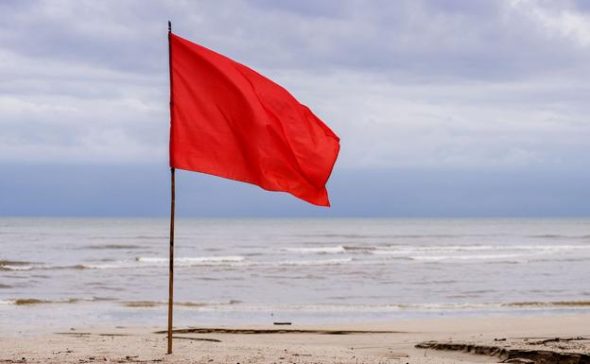 UP TO a total of six bathers had to be rescued on the beaches of Torrox on Sunday, September 13, when entering the sea, after ignoring the red flag that was raised, due to the strong eastern storm that hit the coast over the weekend.
In chronological order, the first rescue took place around 3pm next to the Ferrara breakwater, near the Lighthouse. Two young Spaniards in their 20’s got into the water and had to be helped by two lifeguards, Antonio Martín and Roberto Fernández, who helped them out through the jetty.
Just two hours later, in the same place, a married couple of foreigners, in their 70’s, also had to be rescued by lifeguards, after the woman had trouble getting out of the water and the husband entered to help her.
In this case, the rescue operation was carried out by Karen Nicol Medina, José Manuel Baena and Carlos Escobar. “The rescue was much more complicated than that of the two young people because they were older people, with reduced mobility and overweight, but we were able to get them out well and they did not require health care,” explained the coordinator of the local beach operative, Vanessa López.
Later, there was a third rescue on the Los Llanos-La Carraca beach, next to the dunes. In this case, it was a father and son, who had difficulty getting out of the water on their own.
“It was a complicated Sunday, but thanks to the efforts and courage of the lifeguards we were able to solve the three rescues without major problems,” said López, who lamented “the lack of civility” of these six bathers, who enter the sea when there are strong waves, ignoring the red flag.
“We have a lifeguard permanently in that area of ​​the Ferrara breakwater and Playa Chica, but even so we are not able to prevent them from getting in,” she said.
Regarding the operation, the Civil Protection coordinator has said that it will remain active with lifeguards until September 25. In most of the Malaga municipalities, the life-saving devices on the beaches will end this week, as well as the guards hired by the Board within the ‘Safe beaches’ plan against Covid-19 launched by the Junta de Andalucía.
We hope you enjoyed this article “Six bathers rescued on Torrox beaches after ignoring the red flag”.
Euro Weekly News is delighted to continue to be able to bring you a range of News that doesn’t cost you anything but your internet connection. Whether it’s Local Spanish News or International Entertainment News, we’ve got you covered!
For more Local Spanish News from Axarquia region, head over the page on the Euro Weekly News website.
Euro Weekly News, the people’s paper, we lead others follow!