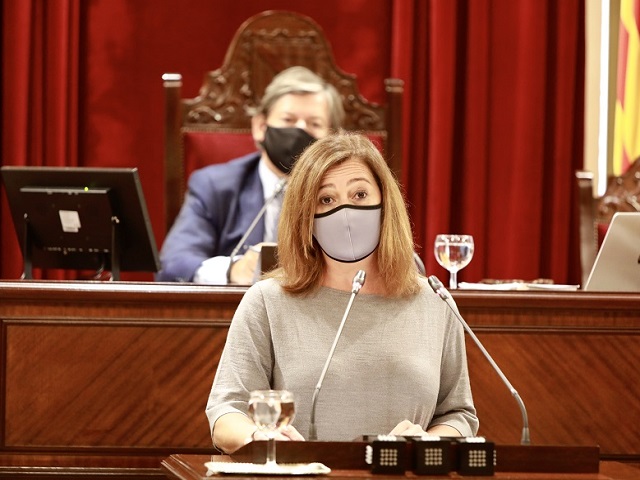 NECESSARY EVIL: “We are talking about difficult decisions, which nobody likes and which demand sacrifices by residents, businesses and workers”, Armengol told the regional parliament CREDIT: Govern Iles Balears Noticias

THE Balearic government is set to continue imposing new restrictions to contain a second wave of Covid-19, regional president Francina Armengol has made crystal clear.
“We are talking about difficult decisions, which nobody likes and which demand sacrifices by residents, businesses and workers”, Armengol said in her address to the Balearic Island parliament on Tuesday to report on the current pandemic situation on the archipelago and the health and economic consequences.
“But we also know that they produce results and will mean that we stop the virus earlier and will return to normality more quickly”, she added.
True to her word on her administration’s commitment to implementing the measures they believe necessary, Armengol announced that tighter restrictions will come into force in the
Arquitecte Bennasar avenue area of Palma this Friday, as well as in the two areas of Ibiza worst affected by Covid-19: Sant Antoni and Vila.
The measures will be in line with those which the regional government introduced for four neighbourhoods in the Mallorca capital last Friday September 11 for a period of 15 days, affecting some 23,000 residents.
They include restricting people from moving outside their area without a justified reason, like getting to work, school or a medical appointment, and limiting family and social gatherings to a maximum of five people.
Armengol insisted that there is a major difference between the current second wave of the virus and the situation the islands experienced during the first wave.
“Now we are more prepared. Today our health professionals know the illness better and how to treat it”, she told the regional parliament members.
She also made the point that “we are now carrying out many more PCR tests, and it is Health which looks for and finds many positive cases through tracing systems, which detect, from the total, 53 per cent of asymptomatic cases.”
The regional government has 240 tracers, plus a further made available by the army.
The behaviour of the public also explains the differences between the first and second waves, according to Armengol.
“Residents are showing once again that they know how to rise to the challenge, that they know to respond responsibly and face the virus by complying with the restrictions and protection measures”, she commented.
To illustrate her point she highlighted an improvement in the health statistics in the previous few days, which reflect a levelling out in the new infection curve.
Perseverance is crucial, she stressed.
“This virus does not allow for relaxation, but nor does it allow for division; it forces us to act in full coordination”, she said, insisting that all decision had been taken on the basis of dialogue between administrations, political groups and social and economic agents.
“We are clear that the fight against Covid-19 is now only a question for the Health department or for the regional government. It is everyone’s responsibility.
We hope you enjoyed this article “Balearic government set to continue imposing new restrictions to contain second wave of Covid-19”.
Euro Weekly News is delighted to continue be able to bring you a range of News that doesn’t cost you anything but your internet connection. Whether it’s Local Spanish News or International Entertainment News, we’ve got you covered!
For more Local Spanish News from Mallorca, head over the page on the Euro Weekly News website.
Euro Weekly News, the people’s paper, we lead others follow!