Protests In Malaga Over New Bar And Restaurant Restrictions 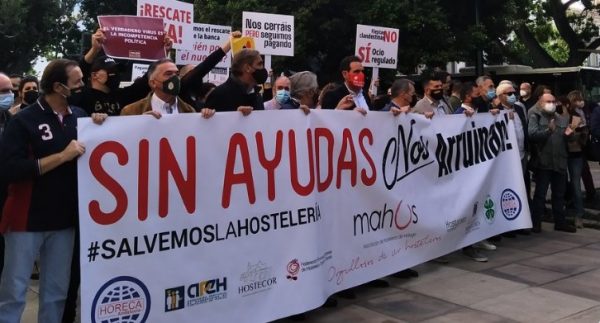 PROTESTS in Malaga over the new Bar and Restaurant Restrictions, brought owners from the hospitality sector onto the streets in unison, on Thursday, November 12.

A noisy protest hit the streets of Malaga on Thursday morning, with around 1000 people from the bar and restaurant industry demonstrating against the latest round of lockdown and curfew measures implemented by the Junta de Andalucia, and at the lack of support shown to the hospitality trade in particular.

The protest began in front of the Malaga offices of the Junta de Andalucia, with a heavy message from the marchers that these new restrictions were “ruining” them.

The march started out as a small group, but soon grew in size, getting a lot louder, with the crowd at one point stretching to the end of Calle Larios, and with some very prominent figures from the hospitality industry taking part, including Javier Frutos, who is the president of the local restaurateurs’ association Mahos, accompanied by Rafael Prado from Café Central, and José Cobos, joint owner of El Pimpi, along with owners of numerous chiringuitos, and also some representatives of local companies who supply the bar and restaurant industry.

Frutos stated, “They said that nobody would be left behind, but we have been. We feel unprotected and we have no help”.
A similar protest took place Thursday evening in Ronda as well.

Only hours after this demonstration, Juanma Moreno, the regional president of the Junta de Andalucia, announced that a fund of 660 million euros would be set aside to financially aid small and medium-sized businesses affected by the current Covid situation, explaining that the aid would take the form of a mixture of tax breaks, grants, and loans.

Thank you for taking the time to read this news article “Protests In Malaga Over New Bar And Restaurant Restrictions”.
For more UK daily news, Spanish daily news and Global news stories, visit the Euro Weekly News home page.
Euro Weekly News is delighted to continue to be able to bring you a range of News from around Spain in English and Global News live as it happens.
Euro Weekly News doesn’t cost you anything but your internet connection. Whether it’s bringing you the local Spanish news or the International news today, we’ve got you covered!
Euro Weekly News, the leading free local and national newspaper in Spain, the people’s paper, we lead, others follow!