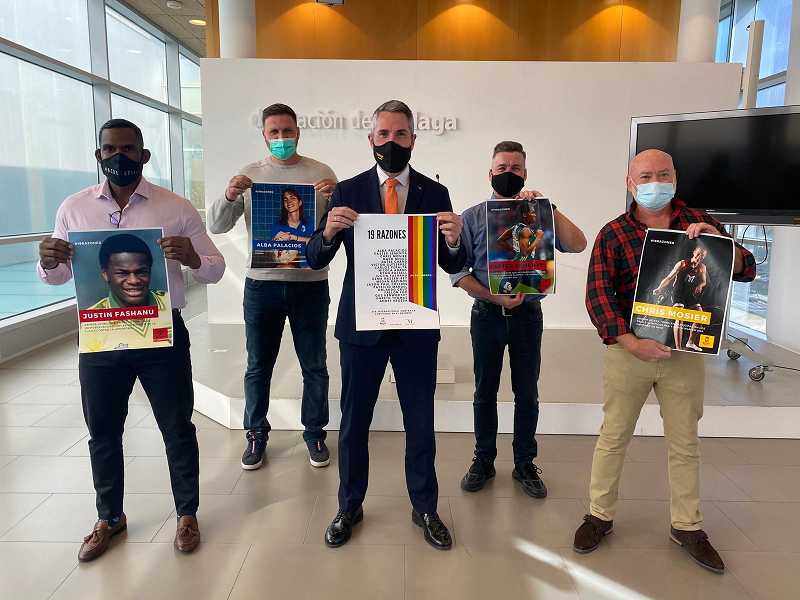 Malaga Provincial Council are promoting an awareness campaign this week to mark the ‘International Day against LGTBIphobia in Sports’, which is this Friday 19, and led by Juan Carlos Maldonado, the vice-president and deputy for Sport in the council, who stressed they want to promote that all sports should be free from any type of discrimination and violence.
The campaign will be launched on social media networks, in a bid to highlight the stories of 19 athletes who have fought against and overcome discrimination in sports due to their sexual orientation.

Today, Wednesday 17, the delegation of Youth, Education, and Sports of the Provincial Council presented their campaign, in association with the Diversport Sports Association of Torremolinos.

Athletes featured in this initiative include Alba Palacios, Torrelodones CF player and the first transgender soccer player federated in Spain, the American Chris Mosier, the first trans athlete to participate in the Olympic trials in the United States and who was the image of a well-known sports brand.
Also, South African Caster Semenya, an intersex athlete who managed to be a two-time Olympic champion and three-time world champion in 800 meters, questioned for his excess of testosterone, plus Justin Fashanu, the first footballer publically admit his homosexuality, the consequences of which led to his suicide in 1998.
Using the hashtag # 19RAZONES, throughout Friday the social networks of the Sports Service of the Malaga Provincial Council, as well as those of Diversport Sports Association of Torremolinos, will publish the biographies and achievements of these 19 athletes.
Juan Carlos Maldonado described the campaign “as a need to continue reminding society that there is still a part of it that discriminates against another for reasons such as sexual identity, reprehensible and punished attitudes that, unfortunately, still continue to occur”.
Mr Maldonado praised the participants in the initiative as “those who took the first steps in the fight for equality, in the sports field and of whom we must take an example in the rest of the areas of our lives”.
Liván Soto, the president of the Diversport Club said,  “it is important to make the reality of LGBTI + athletes visible, but also to work on raising awareness of good practices for those who have daily contact with the world of sport, such as coaches, sports technicians, and managers of clubs and federations”.
_______________________________________________________
Thank you for taking the time to read this news article “Malaga Provincial Council Promotes International Day against LGTBIphobia in Sports”.
For more UK daily news, Spanish daily news and, Global news stories, visit the Euro Weekly News home page.