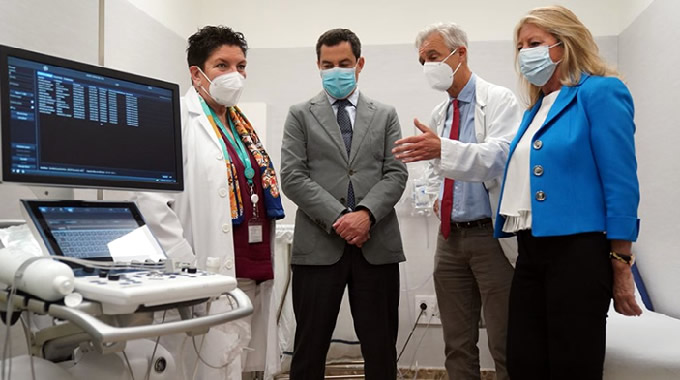 Juanma Moreno, the president of the Junta de Andalucía, announced today, Friday 7, that the proposed works to expand and modernise the Costa del Sol Hospital in Marbella, which had been put on hold for more than a decade, will be put out to tender this Summer, with a budget of €75m (£65.2m).

Mr Moreno, during a visit to the hospital, accompanied by the Minister of Health and Families, Jesús Aguirre, and Ángeles Muñoz, the mayor of Marbella, said the new work was estimated to allow the new building to be opened at the end of 2022, or early in 2023, and, that as well as the building work, an additional €3.6m (£3.16m) was being made available for the upgrade of hospital equipment and expanding and improving outpatient consultations and emergency observation.
He pointed out that this work was first designed and proposed back in 2009, when the facility was already operating at its maximum, and that since then, the population has increased by another 20 per cent, making the need for specialised equipment even more important.

Involved in the new works is the creation of extra space to facilitate 62 more hospital beds, twice as many ICU beds as there are currently, and an emphasis on basic specialities like mental health care, vascular surgery, palliative care, and neurophysiology, with the president stating, “Patients on the Western Costa del Sol will not have to travel kilometres to be cared for when they need these services, and with this, the Hospital Clinic of Málaga is also decongested”, as reported by juntadeandalucia.es.


The Euro Weekly News is running a campaign to help reunite Brits in Spain with their family and friends by capping the costs of PCR tests for travel. Please help us urge the government to cap costs at http://www.euroweeklynews.com/2021/04/16/ewn-champions-the-rights-of-brits-in-spain-to-see-loved-ones-again/