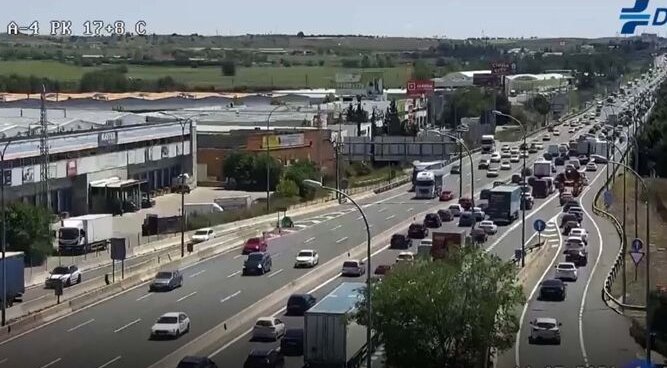 Madrilenians Flee To Andalucía For Their First Weekend In 'Operation Getaway'. image: DGT

Madrilenians Flee To Andalucía For Their First Weekend Out In ‘Operation Getaway’.

Spain is experiencing its first full weekend for the first time in six months without the state of alarm being in force, which allows, among other things, open travel between communities, a situation that will have to be somehow combined with the control of the covid pandemic remembering that the virus is still out there.

As they no longer need a special pass to travel, many Spaniards have packed their bags and have opted for the car to travel to another community or to municipalities in the same region. In less than 24 hours, road trips to leave Madrid have increased by up to 40% compared to last week. The southern highway or A-4, formerly called the Andalucían highway, is one of the most affected by intense traffic along with the A-3 (eastern highway), according to data from the General Directorate of Traffic (DGT).

There have also been massive traffic queues at the beginning of the afternoon when leaving the city of Barcelona, ​​and Seville, in the direction of Cádiz, this weekend. Not helped by the sudden rise in temperature, tempers were high according to some drivers on Facebook.

Andalucía, the Valencian Community, and the Costa Dorada are the favourite destinations of those who have decided to escape for a few days. This increase in traffic was not only seen on the roads but also on trains and in bus stations, according to a report from malaghoy.

After 3:30 p.m. Friday, May 14, the most complicated situation was on the roads of Madrid, where it was a holiday for San Isidro, with grid-lock at all the exits.

On the other hand, Renfe has sold 40% more tickets this weekend compared to last weekend. Madrid-Seville is the favorite destination among those who have chosen to ‘escape’ by train. Renfe has increased its capacity by 41 more trains and 15,413 seats to meet demand, according to TVE.

Road travel has increased by 40%, and this figure is expected to reach 60% by the end of Friday afternoon.