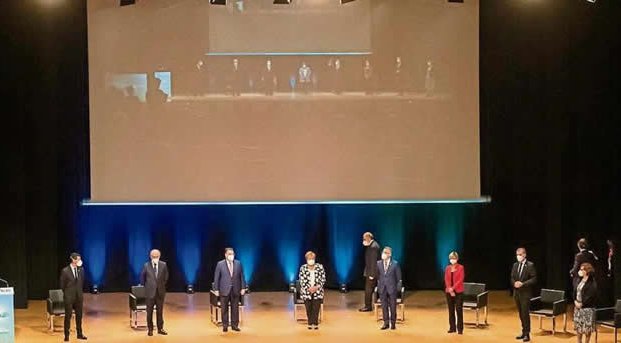 Pere Aragonès, the acting president of the Generalitat, announced on Friday 14, the new Hydrogen Valley of Catalonia project, combining the Tarragona petrochemical company leads with the Rovira i Virgili University (URV), Repsol, and Enagás, in a strategic alliance, which involves 130 companies and institutions in total.

The objective of the project – which Mr Aragonès called “a project to transform the country” – is to attract European recovery funds to make an ambitious plan to convert the idea of clean energy into a reality, as the local petrochemicals companies consume a huge amount of hydrogen in many of its production processes, but the plan is to produce the so-called ‘green hydrogen’, produced from renewable energies (photovoltaic, wind and hydro), without any of the current carbon dioxide emissions.

This project is seen as a huge opportunity for Catalonia – with Tarragona as its epicentre – to attract millionaire investors, as the new green hydrogen will not only be used for the chemical industry, but will be used to replace fossil fuels from heavy vehicles like lorries and buses, for ships and aeroplanes, and even for heating homes in the future.

There is also the possibility of creating a green energy grid, with Enagás president, Antoni Llardén, stating that he hopes to “generate a market that does not exist now. We want to export hydrogen to the rest of Europe, we already have a project with France”, as reported by lavanguardia.com.

Catalonia starts now – with the involvement of the Barcelona Metropolitan Area (AMB) – the challenge of being the first to attract Next Generation funds, as any project that the initiative invests money into must cover 75 per cent of the costs themselves, through private investment, which means that if the money for the project can be raised privately then in three years the green hydrogen plan can become reality.

Repsol’s role as a major producer and consumer of hydrogen in the polygon is transcendental, as it is the ideal setting for the green conversion, and Antoni Brufau, the president of Repsol said, “We have to consume less energy and work in the circular economy, to use the hydrogen that we now consume to use it in mobility, transport, and export”.