Woman In Asturias Attacked And Injured By A Bear 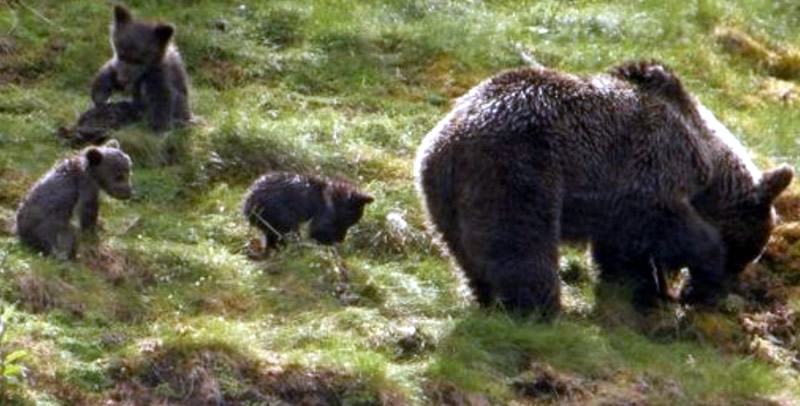 Woman In Asturias Attacked And Injured By A Bear. image: wikimedia

WOMAN In Asturias Is Attacked And Injured By A Bear, but was not seriously hurt

A 75-year-old woman was walking with a group of friends last Sunday evening (May 30), on a country road near Cangas del Narcea, Asturias, when she started to lag behind, only to turn a corner and be confronted by a bear that suddenly appeared out of the woods.

When a bear finds itself in this type of situation, it is known that its typical reaction is to stand upright and raise its paws, catching the woman with its claws across her lower face, and causing her to fall, breaking her hip on impact with the ground, with the bear immediately retreating into the forest.

The bear’s victim was taken to the Carmen y Severo Ochoa Regional Hospital, in Cangas del Narcea, where she was treated for the wounds to her face, and where she reportedly remains under observation in a stable condition, waiting an operation to fix her broken hip, according to El Pais.

As the bear rushed back towards the woods, it encountered two other members of the woman’s group, who avoided any confrontation with the animal, which, according to data from the Fundación Oso Pardo (FOP) is normal, as since 1988 there have been nine similar incidents involving bears in Spain, none of which resulted in deaths, with only three of the victims being hospitalised, and only one suffering a possible life-threatening hemorrhage.

The Guardia Civil – along with the Bear patrol, an entity that specialise in this mammal – has launched an investigation to try and clarify what happened, involving officers from the Natural Environment nursery.

José Víctor Rodríguez, the mayor of Cangas de Narcea, explained his theory that the bear had probably seen the group of people walking along the road and had been waiting in the bushes for them to pass, then thinking that there was nobody else, had made its way to cross the road, only for the woman to appear around the corner of the road.

Probably startling the bear – a creature that is not known to be confrontational – it reacted as it only knows how, and unfortunately hurt the woman, but it would appear that the mammal had no intention to cause more harm as her companions, when alerted by the woman’s screams, had immediately turned back and seen the bear run into the woods.