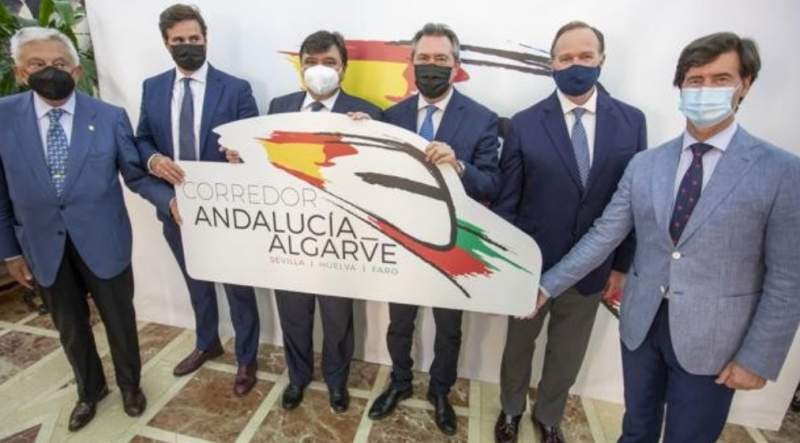 A historic alliance was signed today, Tuesday, June 2, to join the cities of Sevilla and Huelva with southern Europe, crossing the border into Portugal’s Algarve region, with the high-speed train, with a line going from Sevilla to Faro.

In the meeting in Huelva Town Hall, the manifesto relating to the Andalusia – Algarve High-Speed ​​Corridor (Seville-Huelva-Faro line) was signed by Gabriel Cruz, the mayor of Huelva; Juan Espadas, the mayor of Sevilla; Miguel Rus, the president of the Seville Business Confederation; José Luis García-Palacios Álvarez from the Huelva Federation of Entrepreneurs (FOE); Daniel Toscano, the president of the Official Chamber of Commerce, Industry, Services and Navigation of Huelva; and Francisco Herrero, his counterpart in the Seville Chamber.

It was last year that Huelva Town Hall had proposed this idea of cross-border projects to increase travel possibilities between the two countries, with Daniel Toscano saying, “It has gone from a provincial initiative to a regional project with which it is intended to alleviate the communication deficits on both sides of the border”, as reported by sevilla.abc.es.

Two key ideas have been discussed in each and every one of the meetings relating to this project, on the one hand, everybody praised the “unwavering” support of the administrations and economic entities that subscribe to the manifesto, and secondly, the need to take advantage of the Presidency of the Euroregion until 2022 by the Junta de Andalucía, which is seen as an opportunity to give impetus to the project and obtain European the necessary funds for financing it.

Juanma Moreno Bonilla, the president of the Board, has supported the project from the start, to whom Toscano expressed his gratitude, and now the next phase involves a similar meeting with the Portuguese officials in Faro, who have publicly voiced their support in favour of the project, and in the near future, all parties will sit down and sign a manifesto with the Faro and Algarve business network.

Huelva’s mayor said it is time “to lay the foundations for a new centrality in the south of the peninsula”, and that this act is a sign of “the commitment of Huelva and Seville to a strategic project, key to progress and investments”, while García-Palacios said, “Will and commitment will be needed, both from the long-term institutions and from the citizens of both sides of the Guadiana”.

He added, that today’s signing, “will not remain in a manifesto moreover, an unborn project is recovered 30 years later, now the right circumstances are in place”, with Sevilla’s mayor commenting that the signed manifesto is “a successful alliance”, and that the project will result in “the strengthening of relations between Spain and Portugal, and a basic pillar to unite interests”.