Junta Illuminates Seville To Celebrate The Start Of The Eurocup 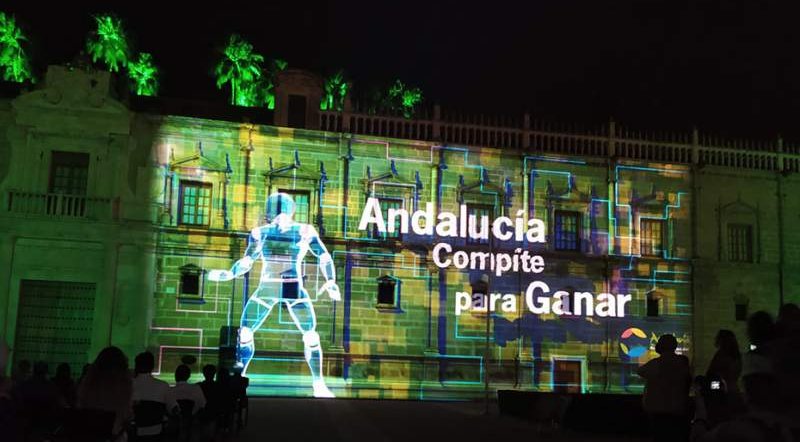 The Ministry of Education and Sports has organised a light show and audiovisual projections this weekend to celebrate the start of the Eurocup.

The Ministry of Education and Sports has organised a light show and audiovisual projections that will adorn the Andalucian capital this weekend to celebrate the start of the Eurocup, which has one of its matches in Seville, the only one in Spain. The counsellor Javier Imbroda has presented the lighting show at an event held at the Andalucian Parliament headquarters where the video mapping has been projected, which will also be shown during the celebration of the matches of the Spanish team in the days before it. In total, nine points in the capital of Seville will have special lighting that can be seen on June 11, 12, 13, 14, 18, 19, 22 and 23.
Javier Imbroda stressed that the European Championship has placed Andalucia at the epicentre of world sport and has shown his satisfaction that this Government has organised an event of this magnitude in just two months, since UEFA decided to change the venue in May from Bilbao through Seville. In addition, he added that it is an excellent opportunity to show the world the La Cartuja stadium, a five-star facility that until now did not have the content it deserved and that is once again open hosting world-class events.
The counsellor has also stressed that the celebration of the Eurocup will generate a high tourist and economic impact on the city of Seville and its surroundings. In total, following the estimates made by UEFA, the four games that Seville is going to host will generate an economic return of some 215 million euros. Of these, 73 million would be of direct economic impact, considering at least 16,000 spectators per game, at an average of 380 euros of spending per day, and an average stay of three days. The remaining 142 million euros would be generated by the media return from the broadcast of the event. In this sense, the accumulated global audience expected of all the competition venues is estimated to be around 5 billion viewers.
Imbroda thanked the work carried out by Acciona Ingeniería Cultural, the company in charge of designing this show and which has created a light route along the banks of the Guadalquivir from the Alamillo bridge to the Torre del Oro, passing through the Barqueta bridge, the Schindler Tower, Torretriana and the Triana Bridge. In each of these points, there will be 20 aerial light tracers, as well as laser effects that will be modified throughout the afternoon-night. Graphics with content related to the meeting will also be screened in four of them: Alamillo and Barqueta bridges, including the Andalucian Pavilion, Canal Sur Radio headquarters, the Schindler Tower, Torretriana and Torre del Oro.
Likewise, on June  19 and 23, coinciding with the celebration of matches, the Palacio de San Telmo and the Andalusian Parliament will turn their facades into authentic screens on which images of the European Championship and the participating countries will be projected. A mapping technique will be used, which uses the facades to generate three-dimensional and immersive effects. On the 14th, this show can also be enjoyed in Parliament.
With this initiative, Seville wants to make its citizens participate in the celebration of the four matches of the Eurocup that will host the Cartuja Stadium, whose capacity will be limited to 30 per cent due to the health restrictions resulting from the pandemic.
This initiative will also be neutral in greenhouse gas emissions since the CO2 it generates will be offset by Acciona Ingeniería Cultural in clean energy projects.