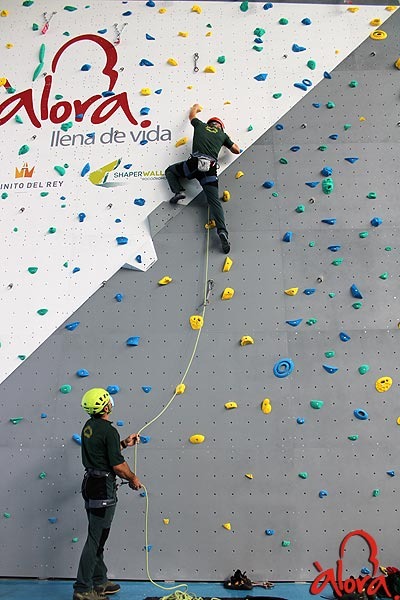 Highest Indoor Climbing Wall in Andalucia Opens in Malaga.
The Malaga town of Alora is now home to the highest indoor climbing wall in Andalucia.
The stunning climbing wall was opened on Friday at the Municipal Sports Pavilion in Alora, in Spain’s Malaga. The climbing wall which is an indoor wall comes in at a height of 70 metres and is the highest climbing wall to be found inside, in the whole of Andalucia. The stunning attraction is set to host various activities and even championships.
The new climbing facilities were opened by the Mayor of Alora, Francisco Martínez Subires and the Councillor for Sports, Francisco Javier González Postigo.  The wall boasts three different routes each of which have different levels of difficulty which is differentiated by the colour of the holds on the wall.
The company in charge of creating and assembling the stunning attraction is Shaperwalls S.L. It has taken four months to put together, but is now ready for use. A direct grant from the delegation of Environment, Inland Tourism and Climate Change of the Diputación de Málaga has been used to finance the initiative according to the Consistory.
According to the town hall the opening event was attended by “by the president of the Andalusian Climbing Federation, Julio Perea; councillors of the Municipal Corporation; the sergeant of the Guardia Civil, Adrian Velasco; the mountain group of the Guardia Civil of Alora, the technicians of the Sports area; the head of the Local Police, Antonio Reina; and a large number of people fond of climbing and sport in general.”
So be sure to stop on by and enjoy a fabulous day out for all the family, that is not only mentally stimulating but also great physical exercise. Climbing can be fantastic fun for everyone involved.