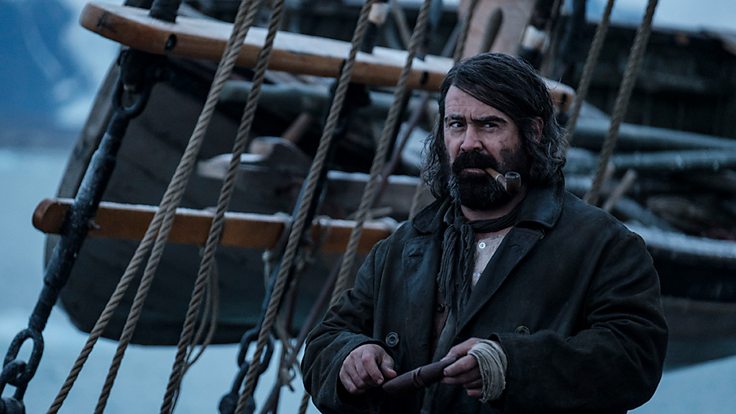 Photo’s released by the BBC show Farrell looking years older and pounds heavier than audiences are used to seeing him.

Set in Hull and on the ice floes of the Arctic in the late 1850s, The North Water’s location work took place primarily in the Arctic, shooting on the frozen seas north of the Svalbard Archipelago. The cast and production team sailed as far as 81 degrees north to film sequences in the pack ice, the furthest point north it is believed a drama series has ever filmed before.

The North Water tells the story of Patrick Sumner, a disgraced ex-army surgeon who signs up as ship’s doctor on a whaling expedition to the Arctic. On board he meets Henry Drax, played by Farrell, the harpooner, a brutish killer whose amorality has been shaped to fit the harshness of his world. Hoping to escape the horrors of his past, Sumner finds himself on an ill-fated journey with a murderous psychopath. In search of redemption, his story becomes a harsh struggle for survival in the Arctic wasteland.

Colin Farrell rose to fame in 2003 with his portrayal of Danny Witwer in Steven Spielberg’s Minority Report. Since then, Farrell has acted in a wide variety of roles, winning a Golden Globe in 2009 for Best Performance by an Actor in a Motion Picture – Comedy or Musical for In Bruges.

Farrell was also nominated for a Golden Globe in the same category for his performance in the critically acclaimed The Lobster.

Recently, he starred in the box office success and Harry Potter spin-off Fantastic Beasts And Where To Find Them and the critically acclaimed The Beguiled and The Killing Of A Sacred Deer. He will also star in Disney’s forthcoming live-action remake of Dumbo.