Wales Dumped Out Of Euro 2020 By Rampant Denmark 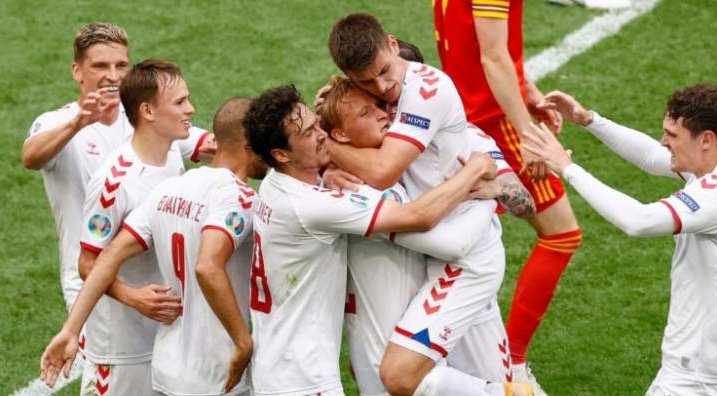 Wales Dumped Out Of Euro 2020 By Rampant Denmark. image: twitter

Wales opened the knockout phase of Euro 2020 today, Saturday 26, with their match against Denmark, in the Johan Cruyff ArenA in Amsterdam, hoping to emulate their incredible run of Euro 2016 in France, that saw them get to the semi-finals, where they lost to eventual champions, Portugal.

Both teams had struggled to get out of the group stage, with Denmark winning just one game, and of course, suffering the terrible incident involving Christian Eriksen collapsing with a heart attack.

A very disappointing Welsh team ran out 4-0 losers, and are out of the tournament, having substitute Harry Wilson red-carded in the 90th minute to round off a very bad afternoon in Amsterdam for Rob Page‘s men.

Kasper Dolberg, from Ligue 1 club, Nice, opened the scoring on 27 minutes as he curled in a fine strike from the edge of the penalty area, and he doubled his tally in the 48th minute as he pounced onto on an error from Neco Williams, after he had blocked a shot from Barcelona‘s Braithwaite, only for the ball to bounce to Dolberg who smashed the ball past Ward from close range.

In the 88th minute, Maehle, unmarked at the back post, added the third as he fired into the top corner, to see Wales dumped out of the tournament, and send Denmark on their way to a last-eight encounter in Baku, Azerbaijan, but, wanting some of the action, Braithwaite scored an injury-time goal, which was given by VAR after initially disallowed for offside.

Wales, in all honesty, were very poor, and really the result was a fair one considering how the Danes played, and whoever plays them in the next round, on this form, will be slightly nervous, to say the least.