European Champions Portugal Are Out Of Euro 2020 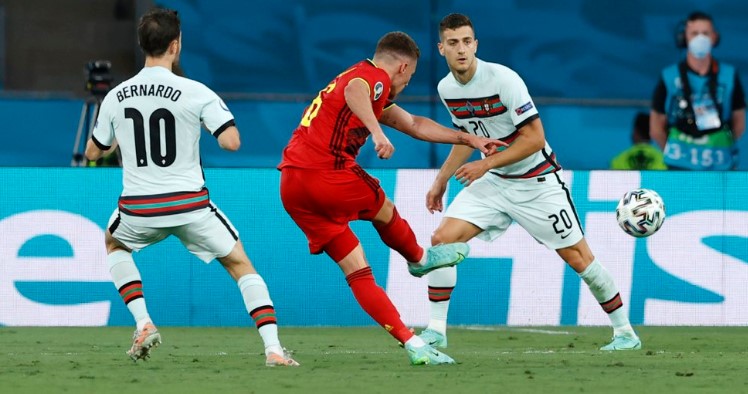 European Champions Portugal Are Out Of Euro 2020. image: twitter

One of two ‘big games’ in the knockout stage of Euro 2020 took place this evening, Sunday 27, in Sevilla’s beautiful La Cartuja Stadium, between current European champions, Portugal, and one of this tournament’s hot favourites, Belgium, with a plethora of stars on display from both sides.

Belgium won all three group matches, whereas European champions Portugal qualified as a third best-placed team, but a clash between the likes of Ronaldo, Fernandes, and Jota, up against Lukaku, DeBryne, and Eden Hazard, was tailor-made for excitement.

A quiet first half was suddenly lit up by a sumptuous strike on 42 minutes from outside the box by Thorgan Hazard, with Rui Patricio having no chance of stopping it from going into his net, to give Roberto Martinez’s Belgium the lead at halftime.

Manchester City star Kevin DeBruyne limped off the pitch just after the restart, after clashing with Portugal midfielder Joao Palhinha, but then an action-packed second 45 minutes followed, with almost end-to-end play from both teams, in a display of entertaining football, interspersed with a few moments of ill-tempered clashes, as referee Felix Brych showed several yellow cards.

Fernando Santos brought on Bruno Fernandes and Joao Felix, a move that did change the tempo dramatically, with Raphael Guerreiro coming the closest as he smashed a long-range effort against the foot of Real Madrid goalkeeper Thibaut Courtois‘s post.

Wave after wave of Portuguese attacks just couldn’t bring that equaliser, and Belgian counter-attacks almost ended in a goal on two occasions as Inter Milan’s Romelu Lukaku did a splendid job as the main target man, and Belgium clung on to that solitary goal, to set up a tasty quarter final encounter on Friday with Italy, which they might have to play without midfield genius Eden Hazard, who left the pitch holding his hamstring near the end of play.