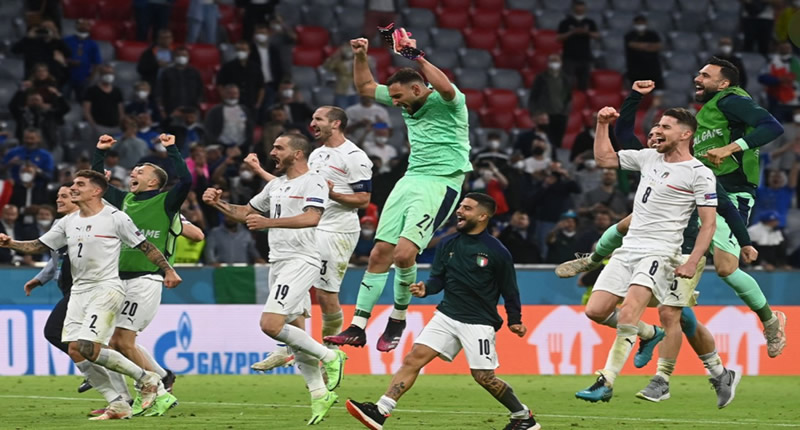 After the thrills of Spain versus Switzerland earlier today, the second quarter-final featured two of the hot favourites to win this Euro 2020 tournament, Italy and Belgium, in what promised to be a cracker of a game in Munich’s Allianz Arena.

Italy have the edge over Belgium in their past meetings, with the Red Devils’ only competitive win against the Azzurri coming in the Euro 1972 quarter-finals, but with both teams having won their last 14 UEFA European Championship matches, the victors tonight will set a new competition record, a mark they both currently share with Germany.

First with the ball in the net were Italy, as Leonardo Bonucci of Juventus put Giovanni Di Lorenzo’s flick past Thibaut Courtois in the Belgium goal on 13 minutes, but, VAR had a say, and it was ruled offside.

The next time the ball was in the net, after 31 minutes, there was no doubt about it, with Jan Vertonghen making the mistake of giving the ball to Marco Verratti, who laid it off to Inter Milan star Nicolo Barella, who majestically beat both Thorgan Hazard and Thomas Vermaelen before shooting low beyond Courtois for 1-0.

Half time was closing in but Italy surged forward one more, Barella  spraying the ball to Lorenzo Insigne, who cut inside Tielemans and unleashed an amazing shot into the far corner of the Belgium goal, 2-0 Italy.

With no choice but to go for broke, it took two minutes for Belgium to cut the deficit, as Di Lorenzo brought Doku down, leaving Romelu Lukaku to drill home his penalty kick right down the middle of the goal as Donnarumma dived to the right, his 22nd goal in 19 internationals.

On 61 minutes, it was Lukaku at the far post just unable to finish an incredible pass from DeBruyne, after the teenager Doku had fed him, but Spinazzola was on the line to clear it.

Eight minutes of added time after what looked like a bad injury to Leonardo Spinazzola, seeing him stretchered off, gave the Belgians a final chance to level the match, but it was not to be, and Italy will go to London’s Wembley Stadium next Tuesday 6 to play Spain in the semi-final.