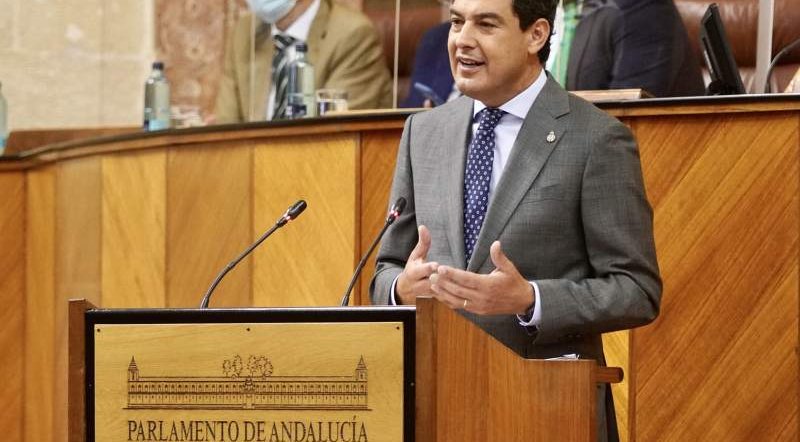 The President of the Junta de Andalucia, Juanma Moreno, has called on Madrid to treat all autonomous communities fairly amid claims that it is preparing to offer tax incentives to companies to return to Catalonia.

“It is unavoidable and urgent to restore a climate of understanding, cooperation and solidarity in Spain that avoids territorial inequalities and fosters convergence, economic and social, in the country,” Moreno told the Andalucian parliament on July 7.

Madrid owes Andalucia 10.835 billion euros in debts accumulated since 2009 and he criticised the government for dispersing Covid 2020 fund by GDP not population.

By doing so Madrid was “giving more to those who have the most” Moreno said.

Andalucia received 2.199 billion in Covid funds, 13.7 per cent of the total despite having 18 per cent of the Spanish population. each Andalucian received 261 euros while the average for Spain was 340 euros per inhabitant.

Covid 2021 funds will be distributed according to population, and Andalucia will get 2.357 billion extra.

“At this decisive moment, all communities should have the same opportunities for recovery,” he said.

“The logical question, which the Government must answer, is why was the same criterion not followed in 2020? Why is the adjusted population criterion not maintained in the rest of the financing of the autonomous communities? Even more so when the current Minister of Finance was the main defender of this criterion and admits that the distribution punishes Andalucia,” Moreno added in reference to Finance Minister Maria Jesus Montero who previously was head of Andalucia’s finances.

Moreno also urged the government to distribute Next Generation EU funds by population.

“I think it is the fairest criterion because it is the citizens who are the final recipients of that money and those who really have to benefit from those resources through better health, better education or more capacity to make employment policies,” he said.

“Recovery is a collective challenge in which collaboration between institutions and territories is essential. No one can have privileged positions and whoever so wishes will face Andalucia defending the equality and solidarity of the Spanish people,” he added.

Meanwhile, Prime Minister Pedro Sanchez is reportedly under pressure to provide tax breaks to encourage companies to return to Catalonia after a mass exodus to Madrid in 2017 following the region’s independence bid. A failure to deliver tax incentives could cost him the support of Catalan nationalist parties who prop up the PSOE in government, according to Spanish media reports.