Sharp size reduction in dinosaurs that changed diet to termites 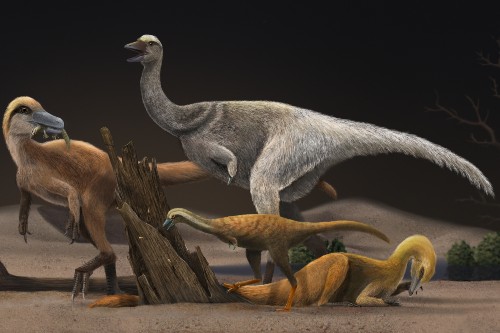 Dinosaurs were generally huge, but a new study of the unusual alvarezsaurs show that they reduced in size about 100 million years ago when they became specialised ant-eaters.

The new work is led by Zichuan Qin, a PhD student at the University of Bristol and Institute of Vertebrate Paleontology and Paleoanthropology in Beijing. He measured body sizes of dozens of specimens and showed that they ranged in size from 10-70 kg, the size of a large turkey to a small ostrich, for most of their existence and then plummeted rapidly to chicken-sized animals at the same time as they adopted a remarkable new diet: ant-eating.

The alvarezsaurs lived from the Late Jurassic to Late Cretaceous, 160 to 70 million years ago, in many parts of the world, including China, Mongolia, and South America. They were slender, two-legged predators for most of their time on Earth, pursuing lizards, early mammals, and baby dinosaurs as their diet.

“Perhaps competition with other dinosaurs intensified through the Cretaceous,” says Prof Michael Benton, one of Zichuan’s supervisors, at Bristol’s School of Earth Sciences.

“The Cretaceous was a time of rapidly evolving ecosystems and the biggest change was the gradual takeover by flowering plants. Flowering plants changed the nature of the landscape completely, and yet dinosaurs mostly did not feed on these new plants. But they led to an explosion of new types of insects, including ants and termites,” he added.

This restructuring of ecosystems has been called the Cretaceous Terrestrial Revolution, marking the time when modern-style forests and woodlands emerged, with diverse plants and animals, including insects that specialised to pollinate the new flowers and to feed on their leaves, petals and nectar.

A key problem with many alvarezsaur specimens, especially the chicken-sized ones, was to be sure they were all adults. “Some of the skeletons clearly came from juveniles,” says Dr Qi Zhao, a co-author and an expert on bone histology, “and we could tell this from sections through the bone. These showed the ages of the dinosaurs when they died, depending on the number of growth rings in the bone. We were able to identify that some specimens came from babies and juveniles and so we left them out of the calculations.”

Ant-eating might seem an amazing diet for dinosaurs. “This was suggested years ago when the arms of Mononykus were reported from Mongolia,” says Professor James Clark in Washington, DC, a co-author of this paper, and also one of the first discoverers of tiny alvarezsaurs from Mongolia. “Mononykus was one of the small alvarezsaurs, just about 1 metre long, but probably weighing 4-5 kilograms, a decent-sized Christmas turkey. Its arm was short and stout and it had lost all but one of its fingers which was modified as a short spike. It looked like a punchy little arm, no good for grabbing things, but ideal for punching a hole in the side of a termite mound.”

“Interestingly, alvarezsaur dinosaurs were indeed not small in size or ant eaters at start,” says Professor Jonah Choiniere in South Africa, a co-author of this paper, who was first to report the earliest alvarezsaurs in China. “Their ancestors, like Haplocheirus, are relatively large, close to the size of a small ostrich, and their sharp teeth, flexible forelimbs and big eyes suggest they had a mixed diet.”

Zichuan Qin took all the measurements of body size and mapped these across a dated evolutionary tree of the alvarezsaurs. “My calculations show how body sizes went up and down for the first 90 million years they existed, ranging from turkey to ostrich-sized, and averaging 30-40 kg,” says Zichuan. “Then, 95 million years ago, their body size suddenly dropped to 5 kg, and their claw shapes changed from grabbing and cutting to punching.”

“This is a very strange result, but it seems to be true,” says Professor Xing Xu, a co-supervisor to Zichuan in Beijing. “All other dinosaurs were getting bigger and bigger, but one group of flesh-eaters miniaturized, and this was associated with living in trees and flying. They eventually became birds. We’ve identified a second miniaturization event — but it wasn’t for flight, but to accommodate a completely new diet, switching from flesh to termites.”