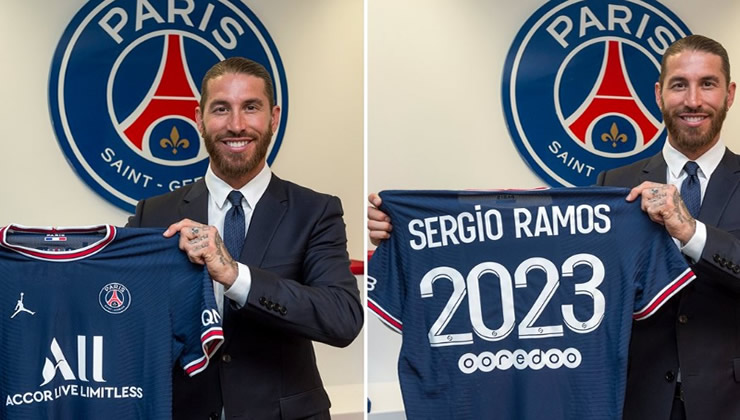 Sergio Ramos, the former captain of Real Madrid and Spain has finally been unveiled by Paris St Germain as their new player, having signed a two-year deal with the French club.

During his first few hours at the club, they released a video of Ramos being driven around the sights of the city in the back of a car, accompanied by members of staff, and during the journey he points out a stadium, saying, “This is it, right?”, to which one of the passengers has to explain the stadium is in fact the Stade de France, where the French national team plays, and not PSG’s home, the Parc des Princes.

“Have you ever played here?” they ask him, to which he replies, “Yes, with Spain”, clearly unfazed by his mistake, according to 20minutos.es.

As PSG finally announce his signing, after spending 16 glorious, trophy-laden years with Real Madrid in La Liga, it now remains to be seen if he can regain his form after spending most of last season out injured, missing Spain’s Euro 2020 campaign as a result, the Sevillian born player captained his country to victory in both the World Cup and the Euros, becoming a Spanish football legend in the process.

Sergio allegedly had better financial offers from both Arsenal, and also Man City reportedly offered him a two-year deal followed by a move to their US club, New York City FC, but he chose the French capital instead.

This really is an incredible signing by Mauricio Pochettino‘s team, adding to the other new signings of Georginio Wijnaldum, the Dutch captain, from Liverpool, and Achraf Hakimi from Inter Milan, with Italian national goalkeeper Gianluigi Donnarumma tipped to be following them to Paris soon shortly, when his Euro 2020 campaign is over with next Sunday.

On top of the new signings, the Parisian club also secured the extension of Neymar’s contract for another two years.