Landslides kill at least 15 in Mumbai after heavy rains 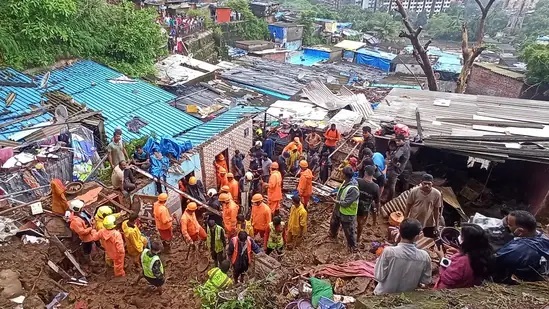 Landslides kill at least 15 in Mumbai India after heavy rains left a trail of destruction and severe waterlogging.

“Twelve people died as a compound wall came crashing down on some houses after a landslide at Bharatnagar Vashi Naka locality in Mumbai’s Mahul area,” a fire official said.

Rescuers could be seen using their bare hands to dig up the ground to retrieve bodies, streamed live by local television- authorities said many more could be trapped inside the debris.

Four of those injured were taken to a nearby hospital, officials said. Local television news channels showed rescuers carrying the injured on makeshift stretchers using cloths inside narrow lanes.

In one of the neighbourhoods, about half a dozen huts located at the base of a hill collapsed on top of each other, officials said.

Several areas in the city were waterlogged after heavy rainfall over the last 24 hours and suburban train services were disrupted, crippling India’s financial capital, where incidents of building collapses have become more common during the monsoon.

Incessant overnight rains threw parts of Mumbai out of gear on Sunday with the city witnessing severe waterlogging, disruption of local train services and vehicular traffic. The rain fury reminded some Mumbaikars of the 24-hour rainfall figure of 944 mm on July 26, 2005.