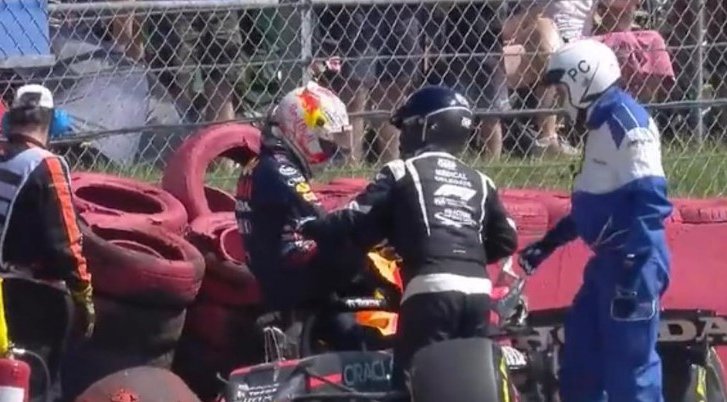 Tensions in F1 appeared high this evening as Max Verstappen blasted Lewis Hamilton’s victory celebrations from his hospital bed, accusing him of showing disrespectful behaviour, following his win in this afternoon’s Silverstone British Grand Prix, during which the two had a first-lap high-speed incident.

It came as the British world champion was attempting to overtake Verstappen as they went into Copse, with Hamilton’s Mercedes clipping the rear tyre of the Red Bull at a speed of around 180mph, sending the car careering off the circuit and through the gravel, into the tyre wall.

Thankfully, the current driver’s championship leader was able to exit the car under his own steam, but he was subsequently taken to hospital as a precaution, for a check-up.

Race stewards handed 36-year-old Hamilton a ten-second penalty for the incident, with Christian Horner, the 47-year-old Red Bull boss reacting angrily to the British driver’s overtaking manoeuvre, claiming the victory must feel ‘hollow’ in light of the accident, saying, “Thank goodness the biggest result for us today is Max was uninjured. He’s having to go to hospital for precautionary checks after a 51G accident, so I hope Lewis is very happy with himself”.

While the Dutch driver tweeted from his hospital bed, as he watched Hamilton celebrating the win, “Glad I’m ok. Very disappointed with being taken out like this. The penalty given does not help us and doesn’t do justice to the dangerous move Lewis made on the track. Watching the celebrations while still in hospital is disrespectful and unsportsmanlike behaviour, but we move on”.

Hamilton told reporters after the race, “It doesn’t feel hollow. There are 2,000 people that work incredibly hard in my team, it’s not just about me. I said this is not what I want to happen in a race. It’s important for all of us to take a step back, I’m sure emotions are running high at Red Bull, and I know what it’s like to be in that position”.

Adding, “I’ve not seen the footage, I will go and have time to reflect on it. I don’t think I’m in a position to have to apologise for anything, we’re out there racing. I’ve heard that Max is in hospital and that definitely concerns me. None of us ever want anyone to get injured”.

As he concluded, “That’s never my intention so I really hope that he’s ok and I’ll check that he’s ok. I don’t agree with the stewards but I take it on the chin and get on with my job. I’m not going to whine about it, everyone is going to have their opinion but I don’t particularly care what people think”, as reported by thesun.co.uk.

The title rivals come together at Copse, pitching Verstappen into a high-speed crash.

The Dutchman was able to walk away but he has been taken to hospital for precautionary checks#BritishGP 🇬🇧 #F1 pic.twitter.com/ol1s9dRJoa